Woolfrey is hat-trick hero as side defeat their county rivals 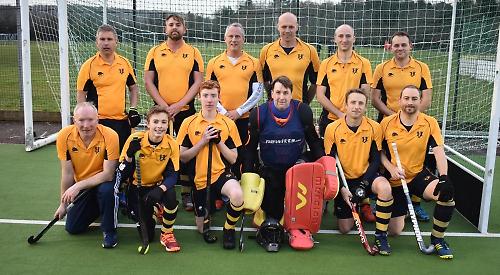 The game started at a fast pace and was evenly matched for the first 10 minutes with both sides playing some good flowing hockey.

Chances were being created at either end and good saves from both keepers ensured the score line remained goalless. Hetherington, at the back for the hosts, was linking up well with the midfield duo of Joyce and Riches, helping create attempts on goal.

Good work by Heaver saw Henley have a good chance fall to Green, only for the keeper to save well at the far post. The away side were starting to find more space and after creating a couple of short corners opportunities finally found the goal to go 1-0 up.

Surbiton’s second goal soon followed with a shot going in off the Henley’s keeper’s pads after some good work down the right.

Henley weren’t to be knocked by this and continued to push forward with good work on the flanks by Taylor and Gupta. Another short corner was won by the home team just before the half time whistle. Foster’s initial flick was saved by the Surbiton keeper but the rebound was duly smashed into the roof of the net by Ed Foster.

In the second half Henley continued to press and good transfer work from Mortimer, Walter and Hetherington began to open up space on the flanks for Gupta and Taylor to exploit.

Both sides were playing some good hockey but Henley could have been level with a couple of gilt edge chances, the first falling to Joseph, who had an open goal in front of him with the keeper and defenders nowhere to be seen, only to push the ball wide of the goal. The second opportunity saw Foster with only the keeper laying on the floor to beat but he flicked the ball over the 25-foot high fencing behind the goal.

These two missed opportunities proved costly and it wasn’t long before Surbiton created a chance of their own and scored their third, putting the game beyond the home side.

MIKE WOOLFREY netted a hat-trick as Henley ran out winners against their county rivals at Jubilee Park.

Adopting some structural and tactical changes to their approach the amber and blues produced a display full of effort, skill and intensity and were well worthy winners.

From the start Henley looked organised and determined. They employed a high press and forced Banbury to turn the ball over regularly with pressure being applied by the front three of Marshall, Cottam and Fergus Heggie. This was backed up by a fine performance from the midfield playmakers. Draycott and Price found plenty of space in the middle of the park and they linked up well with the mobile front three along with Phillips and Herbert in the wide midfield roles.

Henley were camped inside the visitors’ half and their early pressure produced an opening goal on seven minutes. Mike Woolfrey converted with a straight strike after a good team move had earned the home side a short corner.

The first half continued in the same vein, with Henley dominating possession and field position and producing plenty of well worked team moves that continued to threaten the Banbury goal.

Chances came and went, most notably for Ian Heggie and Lawrence Marshall, who both missed opportunities, before Woolfrey grabbed his second goal on 23 minutes, firing in from the top of the circle after some good work from Phillips and Draycott. At the other end Banbury showed the odd glimpse of threat creating a few break away opportunities and forcing a couple of good saves from Ed Hems in goal and a couple of last ditch tackles from the impressive Nicholson and Roberts at the back.

Banbury started the second half with increased intensity as the game became more balanced. The visitors focused on shutting down the Henley right-hand side which had been so fruitful in the first half, and as a result forced more of their own turnover ball and created some good chances of their own.

However, with the visitors looking to push higher as they chased the game, the home side became increasingly a threat on the break, with the front three finding plenty of space. One such break led to what proved to be a crucial goal to extend the lead. Cottam fired in a reverse stick strike inside the near post past the Banbury keeper on 42 minutes after a pass from Fergus Heggie.

Banbury narrowed the gap to two goals when they took advantage of turnover ball in midfield and created an overlap leading to simple far post finish on 51 minutes.

Henley continued to look to score more goals and Ian Heggie could have made it 4-1 when one on one with the keeper, but blasted wide. The home side’s pressure was eventually rewarded when a fine team move down the right saw Toby Phillips feed Cottam only for his shot to be blocked by a defender’s foot.

From the resulting short corner, a well worked move saw Woolfrey complete his hat-trick with a clinical finish from close range. Banbury pulled a goal back late on to make the final score 4-2.

HENLEY 4ths maintained their position at the top of Division 8 West thanks to an away at Oxford Hawks 7ths.

Arriving to find a hard, frosty pitch, the match got underway with only a 20-minute delay thanks to the sun making a timely appearance.

Henley have developed a structured and confident approach this season and once again stepped up, playing assured and free-flowing hockey. The home side were put under immediate pressure with Henley occupying their half, albeit without immediately finding the opening goal.

Their hard work paid off after 20 minutes when the Henley defence, having moved the ball wide, freed up space in the middle for Ed Newbold to send a direct pass to Ian Rechner at centre forward. Rechner then calmly sent the defender and goalkeeper to the right before changing direction and scoring with a reverse stick shot.

Henley’s second, scored just a few minutes later, followed a similar pattern, with Rechner receiving the ball with the keeper and last defender to beat. Once again he was able to send them the wrong way, before flicking the ball into the back of the unguarded net.

The Hawks then mounted their first really threatening attacks just before half-time, but a combination of solid defence and good goalkeeping kept them at bay.

The second half followed in a similar pattern to the first with Henley controlling midfield and having a number of chances to put the result beyond doubt. Whilst the midfield and forwards worked tirelessly in order to control the game, they were well supported by the defence, whose good work was rewarded with another clean sheet.