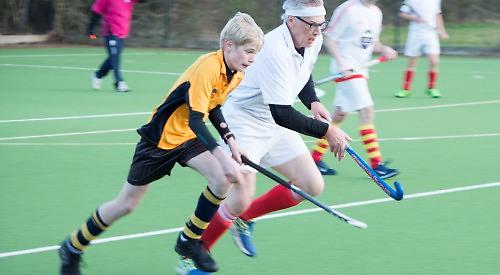 IN the final game before Christmas, high-flying Henley 4ths came from behind to secure a point in their home clash with Abingdon 3rds last Saturday.

Henley started with a large amount of possession but with some good shot stopping from the Abingdon goalkeeper and a counter attack, the visitors scored first.

Midway through the first half Mike McAllister levelled the scores following a ball down the left from Neil Emmett. Henley grew in confidence and it came as a surprise when Abingdon scored a second breakaway goal past the stranded Henley keeper, David Rechner. The Henley defence of Carter, Proudfoot and Ward had not been troubled much up until then.

Henley again started to attack and Mike McAllister scored his second from a short corner which was injected by Harmer to Newbold, who slipped the ball to McAllister senior to score.

Abingdon then scored a third goal before the visiting keeper made a fine save from a penalty stroke taken by Ian Rechner, which had been won when a James Rechner shot was stopped by a visiting defender’s leg on the goal line.

A stirring half-time talk did not initially inspire the home side as Abingdon scored a fourth goal at the start of the second half.

Henley showed huge character and effort as they continued to press the opposition goal through Lane, Hems, Danny McAlister driving in midfield and Ewan Watkins making some clever runs up front. This hard work paid dividends with two team goals scored by Ian Rechner, to help the game end all square.