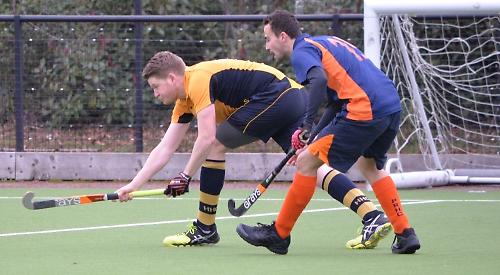 HENLEY 1sts got the year off to a winning start as they completed the double over hosts Slough in their South League Division 2 West clash last Saturday.

The amber and blues managed to record the same scoreline against their Berkshire opponents from the first game of the season when they beat Slough 3-2 at Jubilee Park.

Henley started the match well and controlled the opening exchanges. Rhys Joyce, Luke Gupta and captain Jonny Taylor were finding plenty of space to operate in midfield, allowing Foster, Jean-Jean and Heaver to cause panic within the Slough backline on almost every attack.

After 15 minutes Henley took the lead through Ed Foster, who slapped home a first-time strike after good work down the right from wing-back Tom Walter.

Five minutes later the away side doubled their lead after Brandon Smith found Foster in the left-wing position, who in turn picked out Walter in the Slough D, resulting in a poor tackle and penalty flick awarded to Henley. Joyce stepped up and slotted the stroke home to make it 2-0.

Slough pulled a goal back after a speculative long ball found a Henley foot in the D. The resulting penalty corner was originally saved by Ryan Foggoa in goal, but the rebound was smuggled in from close range. Moments later Henley restored their two goal lead as Chris Green rifled in a powerful strike, following a broken down short corner routine. At 3-1 at half-time Henley took their foot off the pedal in the second half, allowing Slough to pull a goal back early in the half.

Despite having most of possession, and numerous gilt-edged chances to increase their lead, the amber and blues had to hold out for an edgy 3-2 victory.

A SINGLE goal from Kevin Jones was enough to get South League MBBO Division 1 second placed Henley 2nds off to a winning start to the year against Phoenix and Ranelagh 1sts at Jubilee Park.

The first half started well with Henley keeping the ball and playing patient hockey. They progressed the ball down the field well but were disappointing in the final third. Henley created a number of half chances but were unable to capitalise.

Henley’s man-of-the-match Mathew Herbert controlled the midfield and broke down any dangerous advances from the opposition.

Phoenix tactics were to sit deep and then hit Henley on the break. They had two good flickers who used aerials to try to penetrate the Henley defence. The retuning Ali Slay marshalled the defence well and half-time came at 0-0.

The second half followed a similar pattern with Henley having most of the ball but failing to capitalise on their chances. Phoenix posed more of a threat and goalkeeper Dave Bowyer was called upon a number of times to break down attacks and make strong saves.

With 15 minutes remaining captain Kevin Jones broke the deadlock for Henley. The ball was injected into the D by Jody Measures and Jones controlled the ball and having seen his first shot saved he rifled the rebound high into the net.

Henley played out the last 10 minutes in relative comfort and even when Phoenix threatened the Henley defence stepped up.