Gupta strike earns amber and blues a share of the spoils 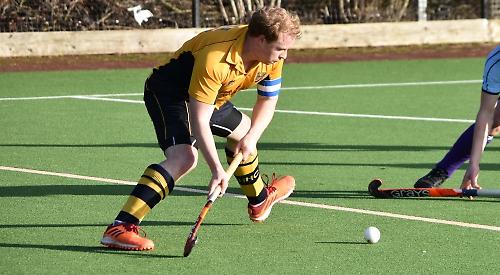 HENLEY 1sts came from behind to secure a South League Division 2 West point from a 3-3 draw at local rivals Maidenhead 1sts last Saturday.

The visitors went into the match with six regular first team players out of action but started the stronger side with Luke Gupta looking threatening down the right wing but it was Maidenhead who took the lead after the ball fell kindly to their forward on the far post.

Henley went in at half-time 2-2 and with 10 men after Mortimer was given five minutes in the sin bin for a robust challenge.

In the second half Maidenhead capitalised on green cards for Henley with Foster, Joyce and Gupta all taking time on the sidelines.

With 10 minutes to go Maidenhead were 3-2 up but after tricky play from Taylor, Henley won a short corner that was dispatched by winger Luke Gupta.

At the other end, Matt Herbert was having a fine game defensively after stepping up from the second team and was also key in starting Henley attacks.

With 10 minutes to go, Foster thought he had got the winner but the ball was swept off the line by the Maidenhead keeper and Mortimer went close with a powerful strike.

The game started off with Henley controlling the ball well and space opening up around the park. Chris Green was the first to strike with a skilful run around the back of the keeper before finishing in style.

The half continued with good intensity and it wasn’t long until Jonny Taylor struck a well-hit volley on the far post and Nico Jean-Jean added a third with an arrow-like strike as Henley went in at half-time 3-0 up.

The second half provided a bit more drama with a penalty flick being awarded which saw Rhys Joyce step up and slot it bottom left taking the score to 4-0. With a period of scrappy play and a number of cards being handed out to both teams including the Henley goalkeeper things did settle down as Woking eventually scored through a short corner to make it 4-1.

Henley closed the game with a good counter-attack resulting in a good finish from Ed Foster.

HENLEY 4ths consolidated their position at the top of the table with a resounding 9-0 win against struggling Phoenix and Ranelagh 3rds at Jubilee Park.

Starting strongly, Henley scored three early goals. The first came when Guy Harmer beat the visiting keeper to a through ball, tapping in at the far post. This sparked a flurry of goals with Mike McAllister running on to a cross before beating the keeper from the top of the D, and Harmer then replicating McAllister’s goal with his own well-taken strike.

As the visitors settled slightly, they began to threaten with long balls through the midfield, aiming to pick out their experienced forward line. However, the Henley defence of Adam Warner, Matt Carter, Tony Conway-Hughes and keeper, Tom Grocock, snuffed out the threat, with timely interceptions and saves.

The second half started with the amber and blues scoring another early goal, when Danny McAllister stroked in a reverse stick shot which left the visiting keeper wrong-footed. Further goals then followed with Ian Rechner scoring from close range after a drive by Jon Grocock and cross by Mike McAllister, and McAllister scoring again after Grocock’s through ball split the defence for Matt Carter to run on to and cross to the prolific striker. Mike McAllister then scored his third from a short corner.

The visitors then got into the game briefly, having some possession and territory, which brought them a little respite. However, Henley again took control with another well-worked move involving colt Sam Phillips playing his first senior match. Taking the ball on the right wing, Phillips played a ball into the D and when Danny McAllister’s shot was deflected up off a defender’s stick, Harmer calmly lobbed the keeper with a chesthigh volley.

Henley’s scoring was completed when Ed Newbold took the ball into the top of the D and hit a crisp strike to the keeper’s right.

The win leaves Henley top of the MBBO Open League Division 8 West table on goal difference with a game in hand.