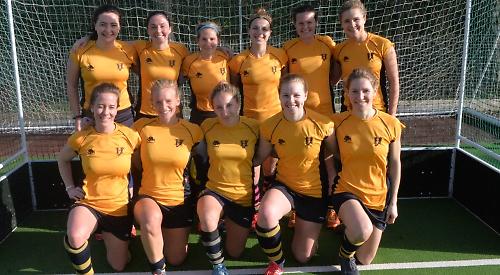 The amber and blues started the match predominantly camped in the Epsom half. Some good movement by Lettie Cary and Georgie Metcalfe upfront allowed Jem Barham to dribble the ball into the visitors’ defensive D and quickly win a short corner for the home side.

An injection from Emma Joseph was stopped dead by Cary at the top of the D which enabled Metcalfe to strike the ball precisely to the far-left hand corner outside of the keeper’s reach to put her side ahead.

Henley kept their momentum high, and after some precise transfers between Chloe Nelson, Mel Joyce and Sophie Hoskins in the defence line, they eventually managed to find Ellie Roseff in the centre midfield. A quick pass to Wiz Chambers on the right-hand side allowed her to use her impressive stick skills to beat two of the Epsom players and put their keeper under pressure once again, however this time to no avail.

Early in the second half Epsom quickly put Henley’s defence under pressure, and a long ball from their defence to forward players enabled them to overload the home defence, and after two impressive saves by Esther Garcia the visitors managed to scrabble home an equaliser. The visitors took full advantage of Henley’s knocked confidence to perform another fast counter-attack. After some great interceptions by Jem Barham, the ball eventually fell to an Epsom defender who once again hit the ball at pace to an attacking player just outside of Henley’s defending D, but Katie Knight’s solid defending allowed her to gain back possession and take the home side out of danger.

Knight transferred the ball across the pitch to Billie Moore who dribbled the ball into Epsom’s D and along the base line, but the visitors intercepted her pass to the penalty spot and quickly were back on the attack.

Some good pressure by Charlotte Cockerton and Moore in midfield put the away side under huge difficulty and they eventually managed to pass it around the Henley side in the D and take a 2-1 lead.

An impressive aerial ball by Nelson in defence enabled Chambers to use her pace to beat the Epsom players and quickly be in the visitors’ D and win the home side a short corner, however with the attacking shot just wide of the goal, the home side were running out of time to equalise.

Epsom quickly gained back possession and fought to extend their lead. Some solid tackles by Roseff in the middle kept Epsom outside of the Henley D, but as the ball fell to one of their attackers, they deflected the ball into the back of the Henley goal to finish the game 3-1 winners.