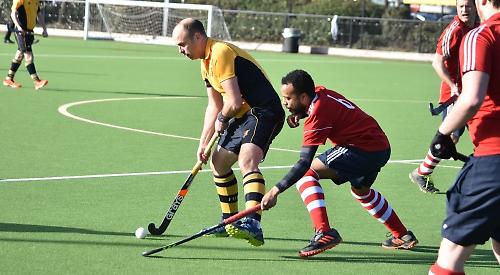 HENLEY 1sts ran out winners in their away South League Premier Division 2 West clash at Richmond last Saturday in a match played out in chilly conditions.

A first half of few incidents saw tight goal-side marking from Kyle Soulsby and a few half-chances for Jeff Joseph for the visitors.

The second half started well and Henley managed to get a foothold in the game and stop the counter-attack nature of the game. Some good play down both flanks saw Henley start to open up the Richmond defence and playing much better the visitors’ chances started to come.

Joseph found some space on the left of the Richmond D and in one shot he managed to get the ball past the keeper and heading for goal. Foster attempted to confirm the goal on line the line but inadvertently put the ball out of play.

Counter-attack after counter-attack followed before Foster dropped a shoulder and sent the keeper down before rolling the ball across goal to Green who failed to hit the target. Minutes later after some more powerful tackling from the back four and good saves from emergency keeper Mills the deadlock was broken. Green redeemed himself from his earlier half-chance to coolly slap the ball beyond the Richmond goalkeeper for the decisive goal of the match.

HENLEY 2nds moved back to the top of the MBBO Division 1 table after beating title rivals Newbury and Thatcham 2nds 2-1 at Jubilee Park.

The game started with a Jeremy Hughes-Burne goal ruled out for the hosts by the umpires. Newbury and Thatcham rarely threatened in the early stages but they soaked up early Henley pressure before counter-attacking down the left, where the ball was squared to the Newbury forward who smashed the ball into the goal off the post to put the visitors ahead.

Henley continued to play well and quickly squared the game after a couple of smart saves from Richard Woolfrey, Tim Herbert was on hand to hit the bouncing ball into the net.

As half-time was approaching Henley put the pressure on and were rewarded when Daniel Jones injected from the left. Richard Woolfrey was once again on hand to cause panic in the defence, the ball broke to Dan Herbert who cooly finished to make it 2-1 to Henley at the break.

The second half was scrappy and although Henley were on top they failed to put the game away allowing Newbury to grow in confidence. They started to squeeze Henley high up putting the pressure on.

Henley’s defence and determination were tested but they held out and recorded a valuable win to put them in pole position with four sides closely contesting the title.