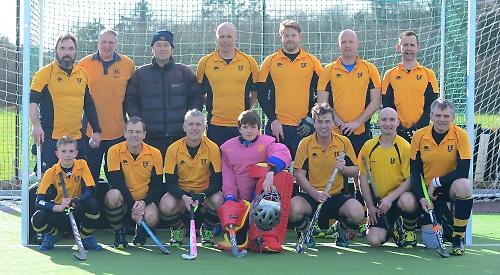 The match started well for Henley, who were on the front foot from the start. After eight minutes the amber and blues took the lead though Chris Green, following a slick team counter-attack goal involving Taylor, Foster, Goseph and Gupta.

Five minutes later home side Chiswick drew level through a short corner routine, which found its way into the far corner.

Henley re-took the lead on the 20-minute mark, as a Joyce aerial ball found Foster in space in the centre of the pitch, who then found Goseph in the Chiswick D. Goseph unselfishly squared the ball to Green for his second goal of the day.

Just one minute later Henley added a third, after captain Jonny Taylor played a quick free hit to Ed Foster, who beat two men and dispatched a reverse stick strike past the Chiswick goalkeeper from the top of the D.

The second half started with another slick passing move resulting in Goseph scoring his first goal of the day, with Green the provider on this occasion. Determined to keep the pressure on the home side, Henley added a fifth with 15 minutes to play, with Green completing his hat-ttrick following a goal-mouth scramble.

With the game seemingly won, Henley took their foot off the pedal and allowed Chiswick back into the match, as they scored two quickfire goals to reduce the score line to 5-3.

With the rain and wind then making playing conditions tough, no further goals were added as Henley maintained their league status with three matches of the season left to play.

HAVING beaten Oxford 8ths the previous week to move up to second in the table, Henley 4ths suffered a setback in their promotion chase losing 3-0 at home to Witney.

The visitors arrived with a strong, youthful side and whilst the early exchanges were evenly matched, Witney put the hosts under more pressure in the D, with home goalkeeper, Tom Grocock, once again pulling off a number of good saves to keep the score at 0-0.

Going forward, Henley kept getting into good positions through the work of Ian Rechner, John Joe Cottam and Iwan Hughes. However, as they approached the visitors’ final quarter, uncharacteristic mistakes led to moves breaking down without their hard work being rewarded.

As the end of the first half approached, Witney began to capitalise on Henley’s mistakes, putting the hosts under increasing pressure. This culminated in captain, Jon Grocock, being shown a green card for what was adjudged to be an intentional block with his foot, leaving his team on 10 players for the remainder of the half. Half-time came with the score at 0-0.

The second half began as the first had ended, with uncharacteristic errors persisting. Despite the endeavour of Henley’s back three, Henley’s luck eventually ran out when the visitors broke into the 23 with an extra player and, following some neat passing in the D, the ball was bundled over the goal line with Witney going 1-0 up.

As Henley continued to push forward, they couldn’t find the breakthrough and despite solid defending, a further goal came after a shot by Witney was deemed to have hit a defender’s arm on its way to goal. The Witney centre back strode forward and, whilst Tom Grocock did well to get a glove to the ball, the powerful shot squeezed between his glove and body.

Despite being under pressure, some positive signs were seen through the calm approach of Sam Phillips, playing only his second game of senior hockey.

Henley battled hard to get back into the game, but enthusiasm was sometimes more evident than precision in their tackling, with two further cards resulting in spells on the sidelines as full time approached. On the final whistle, Witney scored from a short corner.

Henley moved down to third place in the table but with a match away to league leaders Reading on Saturday, promotion remains a possibility.