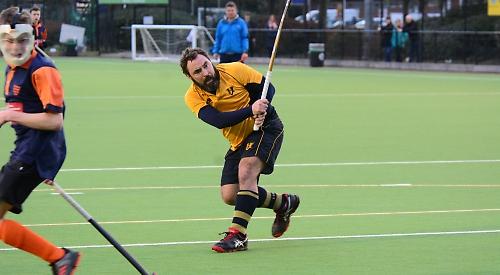 WITH safety now confirmed for hosts Henley, Saturday’s game against Staines in the South Premier Division 2 West was about setting themselves up for next season.

Henley started well and was looking comfortable with Kyle Soulsby putting his body on the line throughout the first half to defend his D.

But then the hosts can consider themselves unlucky to concede a short corner that resulted in a goal for the visitors.

Henley were not fazed by this early setback and they continued to set the rhythm of play through the midfield quartet of Foster, Gupta, Riches and Joyce.

Henley then won a short corner and from this, Foster played a clever flick off the defenders’ stick which lobbed over the Staines keeper and into the net.

With momentum in their favour, Henley brought on forward Goseph, who latched on to a rebound off the post and slapped his shot into the net.

After the break, Henley continued to have control of the game but the Staines keeper managed to keep point blank shots from both Riches and Mortimer out.

In a frustrating end to the match, Staines won a short corner with 10 minutes to go and despite the best efforts of Soulsby, it found its way into the corner of the Henley goal.

HENLEY beat league leaders Reading Rascals, who are undefeated in their last nine games, away from home in MBBO Open League Division 8 West on Saturday.

The Amber and Blues took the lead when Max Hems drove to the top of the D and crossed to Iwan Hughes, who deflected the ball into the net.

Reading hit back to take the lead with two quick goals to go into half time in front.

Henley equalised within 30 seconds of the restart when Louis Poundall sprinted down the right wing and pulled the ball back for Mike McAllister to slot home.

Henley then took control and Conway-Hughes picked the ball up in midfield, beat two defenders and then struck a shot from the top of the D, which deflected in off a defender’s foot.

Then McAllister cut inside the hosts’ right back and squared forDavid Corke to push the ball home and make the score 4-2.

FROM the outset, Henley were in complete control of their MBBO Open League Division 8 West clash with Phoenix & Ranelagh at Jubilee Park on Saturday.

An early short corner brought Henley their first goal of the match when a well-struck shot by Jeremy Clarke smashed into the backboard.

Henley swiftly won back possession after the restart and within minutes of their first, they scored their second goal.

Clarke slipped the ball to Ben Williams, who made the pass to James Edgell who struck it past the keeper and into the net. Phoenix then made a couple of attacks which drew some dramatic saves by goalkeeper Edward Hems.

After 20 minutes, Williams scored Henley’s third when he received a pass from Jeremy Clarke and slipped the ball past the keepers’ pads.

The goals kept coming with David Clarke dribbling the ball around the Phoenix defence before sweeping the ball into the net.

Just before half time, Edgell scored his second goal of the match, picking up a pass from Clarke on the penalty spot and deflecting the ball into the goal.

Despite starting the second-half 5-0 up, Henley did not take their foot off the gas. Ben Proudfoot and Clarke exchanged some great passes, developing the game up the left wing, but the focus of the game shifted to preserving a clean sheet.

Henley maintained their composure throughout the remainder of the match and a late sixth goal was scored by Guy Harmer who, from a tight angle, managed to slot the ball into the goal, following a one-on-one with the Phoenix keeper.