Visitors lose out to champions elect 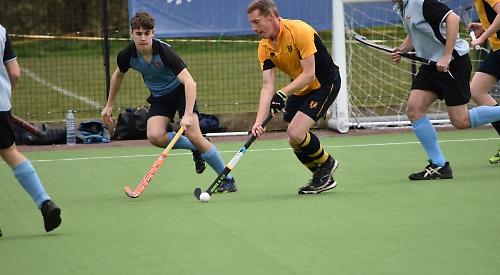 HENLEY narrowly lost out in their away clash at league leaders Surbiton last Saturday.

The opening exchanges of the match were a cagey affair with both teams having opportunities to break the deadlock, Luke Gupta coming the closest for Henley with a mazy run into the top of the D and a reverse stick shot which, agonisingly struck the post.

Sustained pressure from Surbiton saw them take the lead midway through the first half and quickly double their advantage five minutes before the break to leave Henley on the back foot.

An inspiring team talk from captain Jonny Taylor saw Henley come out in the second half and pile on the pressure. A number of short corners eventually gave Henley a glimmer of hope. Ed Foster found space to score a straight strike as the goal took Foster above the Green in the goal scoring standings for the season. Chances for the remainder of the game were few and far between and Henley’s came close at the end but the visitors could not find the equaliser as the hosts have now all but mathematically set to win the league.

A slightly depleted side meant that debuts were handed to three players, and several of the more long-standing players were contributing in different positions.

Despite Henley having the better of the opening skirmishes creating a couple of decent chances, it took a little while for the team to properly settle down, by which time the visitors had gone 2-0 up as they took advantage of the home side’s temporary disarray.

The first half was largely a midfield showdown as both sides battled for possession, though Thame seemed to shade most of the encounters, adding a further two goals. Henley needed to regroup during the break, and this they did, scoring within a minute of the restart when new player Brandon Ray slotted home on the reverse.

Henley’s second came not long afterwards when Tim Herbert linked up with Dan Jones unmarked in the middle of Thame D to steer the ball into the corner of the goal.

Henley were in the ascendancy and the third goal came after a fine move down the right, with Charlie Shaw working a passing move with Dan Herbert who drove to the top of the circle and struck the ball sweetly through the entire defence.

The wind was taken out of the Henley sails when Thame scored from a penalty corner, though debutant Dan Mclaughlin got another back for the home team. The final nail in the Henley coffin came five minutes from the end as Thame profited from space at the back to find their sixth.

This game turned out to be the last game of the season owing to England Hockey calling a halt to remaining matches for the season due to restrictions associated with coronavirus.