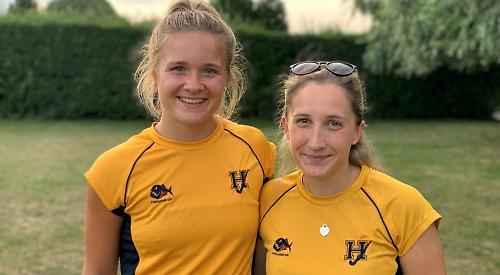 Charlotte Cockerton will take on the role with Chloe Nelson as her vice-captain.

Cockerton succeeds Georgie Metcalfe, who led the team for five seasons, her tenure including promotion into South Ladies’ Division 2.

The new Henley captain has played for the club since 2015, previously playing for Oxford Brookes University while Nelson joined in 2017 and was awarded the coach’s player of the season award for 2019/2020.

Other awards given out for last season went to Jem Mackie for players’ player of the year, top goal scorer to Lettie Carey and the coach’s most improved player to Billie Moore.

Earlier this month England Hockey moved to Stage 4 of their Return to Hockey Roadmap, following the suspension of training and fixtures due to the coronavirus pandemic.

This means that the club has been able to resume competitive activity at training and the new season is set to get underway at the end of August with a programme of friendly matches ahead of the league starting at the end of September.

Henley ladies, who will be running three sides this season, are still welcoming new players to join the club. Anyone interested in joining should get in touch with the director of ladies hockey, Mel Joyce, at mel.joyce.hockey@
outlook.com

Meanwhile, the men’s section of the club have had one change in captaincy across their five teams. Brandon Smith will be taking over from Kevin Jones as the second team captain.

Smith joined the club two years ago after moving to Henley from South Africa and has been a committed and important member of the club since.

Henley have a large men’s section and cover a wide ability topped with the first team competing in the South Premier 2 League.

As always, new players are welcome of any standard. For more information visit www.henleyhockeyclub.co.uk