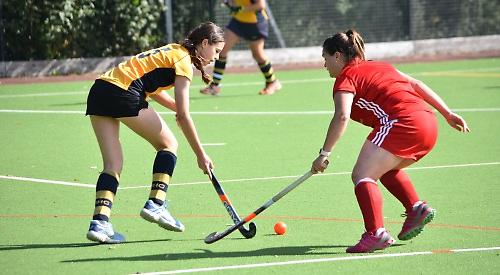 A last-minute change to the squad and a delayed arrival time did not remove any focus on the task in hand.

A swift warm-up was followed by an intense opening five minutes, with mixed possession from both teams.

Henley eventually settled and found some good passages of play down the right hand side through good link up play by Orla Brown and Hayley Munt.

A composed defensive line consisting Mel Joyce, Chloe Nelson and Billie Moore kept the home team at bay during the first half, playing good hockey out from the back with some good long passes with pinpoint accuracy.

Capitalising on the momentum from the first half Henley continued to apply pressure on Teddington’s back line.

Some good closing down from the forwards applying pressure on the defence opened up some opportunities as the visitors narrowly missed a few chances.

Eventually Henley were rewarded when Georgie Metcalfe passed the ball to Kiera Halloran who fired home.

Teddington reacted swiftly to going 1-0 down and within five minutes equalised through a counterattack move.

With only minutes of the match remaining, Henley pushed hard to make amends. Player of the match Chloe Nelson’s long ball found Metcalfe and some interlinking play between the forwards and some scrappy defending from Teddington opened up an opportunity for Kiera Halloran who was waiting far post to reverse sweep the ball into the goal.

Before the start of the match both teams participated in a minute’s silence in honour of Sue Burrell, a member of the club who sadly passed away during lockdown.

The Henley team were keen to deliver a good performance as a fitting tribute to her unstinting commitment to the club. Following a late start to the game due to the late arrival of the umpire, Marlow had the first push back.

Henley’s determination meant the ball was intercepted quickly and the forwards, including Wendy Mcloughlin and Emma Hedges, made good attacks towards goal. At the end of the first half Henley were 1-0 up thanks to a goal by Rachel Herbert following a short corner routine.

In the second half Henley scored another three goals from Lauren Hilditch, Emma Buckham-Hedges and Herbert. Marlow continued to put pressure on Henley as they pulled two goals back.