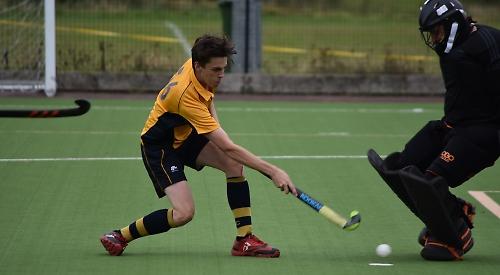 HENLEY 1sts lost out in their opening South League Premier Division 2 West match of the season last Saturday as they went down 3-2 at SOUTHGATE 2nds.

Henley started the stronger of the two sides and were 1-0 up within 15 minutes thanks to well-worked team goal finished off by defender Matt Riches.

Henley’s defence were keeping Southgate quiet and that allowed plenty of possession for the midfield. Just before half time Rhys Joyce played a long ball through to Sam Heaver who was one-on-one with the keeper. The midfielder rounded the keeper and smashed the ball into the goal giving no chance to the recovering defenders to put the amber and blues 2-0 up.

The second half didn’t start well for Henley with defender Robbie Mortimer leaving the pitch with an injury and keeper Ryan Foggoa being forced into some fine saves.

Southgate managed to get a goal back from a short corner and then late on in the half equalised despite their forward appearing to control the ball with his foot before slotting into the goal.

The last 10 minutes became a scrappy affair as both Soulsby and Taylor received yellow cards for breaking down play and Southgate scored the winner in the last minute from close range. Henley had one last chance which fell to Foster but with the ball bouncing at a difficult angle his strike narrowly went over the bar.

Following on from their promotion last season, HENLEY 4ths got their South League MBBO Open Division 7 campaign off to a winning start as they defeated visitors WYCOBME 4ths 3-1.

With a number of colts providing pace to complement the experience of last season’s squad, Henley started the match strongly, immediately taking the game to Wycombe.

Chances soon came with the new front line of Iwan Hughes, Tim Barrass and Jules Aplin putting the visitors under pressure. However, Henley struggled to find the final pass, with a number chances coming and going before a flowing move down the left including Max Hems and the three Henley forwards was finished when Hughes squared the ball to Aplin in the centre of the D. Aplin took a couple of seconds to steady himself before calmly firing his shot past the visiting keeper. Henley began to take control of the match with the defence of Enzo Cheesman, Tony Conway-Hughes and Simon Ward providing a strong foundation on which the midfield could build and control the match.

The midfield’s strength led to Henley’s second when John Joe Cottam and Louis Poundall combined before releasing Hems, who burst into the D and slotted his shot past the keeper. A good first half was marred by an injury to Phil Biggs. The second half started much as the first. However, this time, the amber and blues’ failure to find the back of the net looked like it may be costly.

Henley had showed some good movement up front, but following a flowing Henley attack the visitors turned the ball over and broke up the pitch against the run of play.

The Henley midfield and defence were caught slightly out of position and, after mistakes by both sides, the ball fell to a visiting forward, whose quick control and strike left Tom Grocock in the Henley goal with little chance.

One of the most satisfying parts of the Henley performance was their determination and calmness. With Wycombe getting a goal back, the home side could have panicked but they continued to hold their structure and the third goal soon came, with Hems again scoring as he dribbled into the D, wrong footed the visiting defence and then struck a shot through the keeper’s legs to complete the scoring.