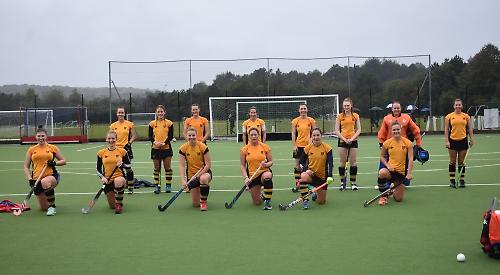 Henley took a while to get going in the wet conditions, but good play from the back from Jane Dench to Billie Moore on the left wing gave the home side several opportunities on goal.

Good play in midfield from Emma Joseph meant Henley were able to get the ball to the forwards and create goal scoring opportunities but they were thwarted by the solid Bournemouth defence.

Henley won the first short corner of the match but couldn’t convert. Bournemouth then won the ball and with a quick turnover and broke away to open the scoring.

From a strong pushback Jem Mackie passed wide to Mel Joyce who played the ball up the wing to Hayley Munt who opened up the defence before winning a short corner. From the resulting short corner Georgie Metcalfe put in a shot at goal which allowed Munt to deflect home for the equaliser.

In the second half there was good play in midfield from player-of-the-match Charlotte Cockerton and Jem Mackie while Kiera Halloran made several runs down the line picking up the ball and driving to the base line as the home side applied further pressure on Bournemouth.

This play managed to win several short corners but Henley were unable to convert any of them due to Bournemouth’s good defence and goal keeping.