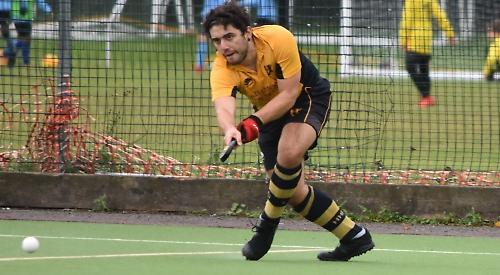 The hosts, who were missing several regulars due to injury, started poorly with Maidenhead taking the lead after five minutes through a short corner.

This prompted Henley to up their game and with Rhys Joyce and Ed Foster on the ball the home side began to pressurise the Maidenhead D. The pressure was rewarded after Luke Gupta ran down the right hand side and pulled back to Chris Green to score his first goal of the season.

The second half continued this way with short corners and opportunities aplenty but Henley couldn’t convert with the early season rustiness showing.

With 10 minutes to go ex-Henley forward Alex Land scored a reverse stick strike for Maidenhead in a counter-attack to put the visitors 2-1 up.

Henley pushed forward but couldn’t find the equaliser and Maidenhead scored once more with 30 seconds of the match to go.

HENLEY 2nds ran out 2-1 winners in their South League MBBO Division 1 clash away at MAIDENHEAD 2nds while HENLEY 3rds recorded their first Division 4 win of the season as they eased past visitors WEST HAMPSTEAD 5ths 3-0.

Henley put the hosts on the back foot early on as the combination of Max Hems, Iwan Hughes and Tim Cima made inroads into the home team’s D. Whilst having looked dangerous from open play, the first goal came from a short corner when, having received the ball on the left hand side of the D, skipper Jon Grocock followed-up his initial blocked shot with a reverse stick effort which he squeezed in from a narrow angle.

Henley maintained pressure on their opponents but following a number of further chances, the home side got level as a result of a breakaway goal.

With the Windsor midfield racing forward in numbers, Jon Grocock looked to have intercepted a dangerous pass with a solid block but the ball deflected to the Windsor left wing who had found space on the baseline, and his drive and cross behind the scrambling Henley defence found an unmarked player on the far post, who calmly pushed the ball home.

The visitors hit back and took the lead within a minute. Breaking forward, Hems and Cima combined well before Hughes flung himself full-length to sweep a shot across the keeper’s pads and into the far corner.

With five minutes of the first half to go the hosts were awarded a short corner. With the initial shot rising up at Simon Ward, the Henley defender did well to get stick to ball at knee height. However, the deflection from Ward’s stick rose up at pace, passing over the right shoulder of goalkeeper Tom Grocock, and into the roof of the net.

In the second half Windsor made some tactical changes, moving an extra player high up the field, and this helped them create space and have increased possession.

Despite some injuries, Henley worked hard both in defence and in attack. With Windsor having a number of short corners, Henley’s young keeper made some solid saves to keep the scores level.

Henley had a series of short corners of their own in the last 15 minutes following good work by Cima, Ian Rechner and debutant, Chris Batey. However, their failure to convert these chances left the visitors having to settle for a point.

In Open Division 8 West HENLEY 5ths ran out 2-1 winners away to OXFORD 8ths.