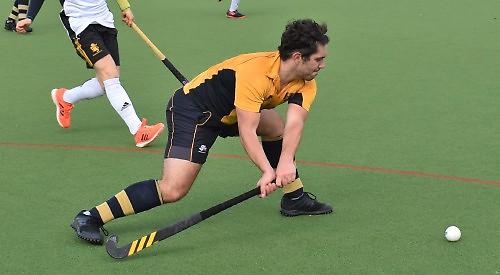 With chances for either team in the early stages, it was Henley who opened the scoring through Geoff Joseph, who pounced on a loose ball in the Bournemouth D after Ed Foster’s drag flick was saved on the line by defender.

With confidence high, Henley continued to create chances in the first half, with the midfield trio of man-of-the-match Rhys Joyce, Gupta and captain Taylor linking up well.

The home side were dealt a blow as a swift counterattack by Bournemouth resulted in an equaliser on the half hour mark.

On the stroke of half-time Henley restored their lead when a well-planned short corner routine involving Foster, Taylor and Joseph resulted in the ball striking a Bournemouth defender’s foot on the goal line. The resulting penalty flick was dispatched by Joyce.

The second half was a disjointed affair with several Bournemouth players receiving sin-bin cards for poor discipline as Henley controlled the possession.

With 15 minutes left to play a flowing move including quick stick skills from youngster Charlie Shaw, saw Matt Riches lift the ball over the away side’s goalkeeper and increase Henley’s lead to 3-1.

HENLEY 2nds went down to a 4-2 South League MBBO Division 1 defeat at AMERSHAM AND CHALONT 2nds while HENLEY 3rds lost out 2-1 at home to MARLOW 4ths in MBBO Division 4.

Having gone 3-0 down after 15 minutes when they were totally overrun at times, Henley responded well, battling hard to reach half time with no further goals conceded.

This was largely thanks to a battling performance by the midfield led by Tony Conway-Hughes. Following a half time tactical adjustment Henley took the game to the opposition.

The combination of Tim Cima and Andy Farrow began to take control of the centre of the pitch, allowing Danny McAllister and Louis Poundall to become outlets on the two flanks. This put pressure on the home defence with both Iwan Hughes and Jules Aplin coming close to scoring. The defence also played its part, snuffing out a number of threatening attacks with Chris Batey putting in some good tackles and keeper Tom Grocock pulling off some good saves from both open play and short corners.

Eventually, with Henley having failed to get the reward they deserved with a goal of their own, the home side scored to make the final score 4-0.

Despite the defeat Henley played the best hockey they have done for at least a season, against a team playing down a number of leagues.

HENLEY 5ths ran out 3-0 winners at Jubilee Park in their clash with BICESTER 3rds in their MBBO Open Division 8 clash.