Wilkinson’s goals enough to see off Phoenix and Ranelagh challenge 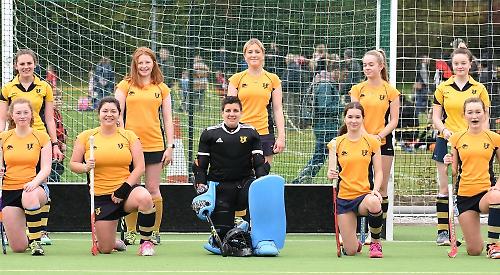 HENLEY LADIES 1sts went down to a narrow 1-0 defeat at home against CHISWICK LADIES 1sts in their South Clubs’ Division 2 clash last Saturday.

Setting the pace of the game, Henley started brightly from the off as they dominated the first half.

Henley were playing aggressive hockey with strong attacking play down both sides of the pitch and it wasn’t long until the home side secured their first short corner. However, Chiswick reacted well to this, and with skilful goalkeeping prevented Henley scoring.

Henley continued to dictate play but were unable to convert while Chiswick took their chance and caught the home side on the counter attack where they won a short corner and subsequently took the lead.

The second half was a tense affair which saw end to end hockey. However, despite winning a last second short corner, Chiswick’s keeper once again kept Henley at bay.

Jane Dench and Chloe Nelson were named players of the match for the home side.

Henley started with a strong attack and put the opposition defence under pressure from the outset.

Phoenix’s defence held their own and didn’t allow Henley to gain any opportunities in the D. Several good runs down the right from Daisy Rolstone resulted in some good balls into the D, but the Phoenix defence were quicker on to the ball than the Henley attack.

Henley kept possession well but allowed the opposition to make several breaks through the midfield. Hannah Holloway and Ella Shute worked hard to keep the ball in the Henley attacking half. There were a few nervy moments when the home defence were put under pressure towards the end of the first half but they kept the Phoenix and Ranelagh attack at bay.

Henley counter attacked with Meg Hearn taking the ball along the baseline, slipping it towards the penalty spot where Rosie Wilkinson fired home to put her side ahead.

In the second half Henley gained possession quickly and put the visiting defence and keeper under pressure.

Hannah Holloway had a good strike from a short corner that saw her shot find the back of
the net but the goal was disallowed.

Phoenix made some quick breaks towards the Henley defence and had a couple of shots on goal which were well saved by goalkeeper Esther Garcia.

Trinity Jacobs made several runs down the left, picking up quick passes from Laura McLoughlin. With seven minutes remaining Jacobs slipped a ball in to the D from the left to Wilkinson who netted her second of the game.

Phoenix fought back and secured a short corner, but Garcia made a good save in a game that saw Daisy Rolstone named player-of-the-match.