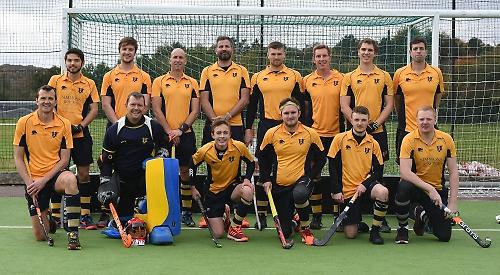 HENLEY 1sts earned a share of the spoils as they drew 2-2 in a feisty encounter at WOKING 1sts in their South Premier League Division 2 clash last Saturday.

After a good start from the visitors it was the home side who opened the scoring against the run of play when they converted a short corner routine.

Woking sat back, trying to protect their lead, absorbing wave after wave of Henley attack with only some good saves keeping Joseph and Green at bay.

Just before half time the visitors’ pressure finally paid off as 16 year old man-of-the-match Charlie Shaw converted a Taylor cross into the bottom corner for his debut Henley goal.

The second half started much like the first with Henley having the majority of possession and Woking having the odd chance attacking from deep. Only good defending from Soulsby, Jones and goalkeeping from Foggoa kept the scores level.

However, the home side took the lead once again when a forward converted at the back post.

Once again Henley went in search of an equaliser with the breakthrough coming when a ball was played into the D by Foster and deflected into the top right-hand corner by Green.

With both teams searching for a winner, tempers started to flare. Some strong challenges and choice words to the umpires resulted in a flurry of green and yellow cards.

With both teams down to 10 men, Woking won a short corner on the full time whistle but the Henley back five managed to smuggle the ball away.

The opening skirmishes went in Henley’s favour with pressure being exerted on the visitor’s back line. The midfield pairing of Matt Herbert and Benji Hetherington allowed the attacking platform to move further up the pitch and pushed forwards Nico Jean-Jean and Jeremy Hughes-Burne deep into opposition territory. The early pressure paid dividends after Dan Herbert and the impressive and improving Toby Phillips burst down the right and found Jean-Jean who crossed early for Hughes-Burne to tap home at the far post.

Pressure continued to be applied but chances were squandered from both open play and penalty corners, leaving the door ajar for Thame to find their feet and expose the space between the Henley midfield and defence. The slender lead was wiped out shortly afterwards when Thame found the back of the net from a penalty corner following some lacklustre marking, not helped by an injury to Phillips and several other substitutions.

This theme continued throughout the match as Henley failed to come to terms with a high opposition forward line and the Thame second goal set a pattern that they exploited whilst Henley rolled the dice at the other end to no avail.

A third goal followed soon afterwards, but the home side felt the game was still in their grasp at half time.

Despite playing the majority of the second half in opposition territory Henley only managed to come within one score when Jean-Jean converted from close range.

Thame netted twice more using their now familiar tactics which Henley either failed to deal with or allowed to happen as they pushed forward. Dave Bowyer, back from injury, made some good blocks while Jean-Jean tormented the defence and had a goal disallowed, hit the post and side-netting but not the inside of the goal.

There was some reward after a foul on the line by Thame allowed Richard Woolfrey to slot home from the spot. Soon after Thame netted their sixth goal of the afternoon to complete the scoring.

In Division 4 of the MBBO League, HENLEY 3rds went down to a 2-1 win at BRITISH AIRWAYS 1sts.

HENLEY 4ths ran out 5-3 winners in their home clash with OXFORD 7ths in MBBO Open Division 7.

The hosts scored within 15 seconds of the start when Danny McAllister stole the ball from the Oxford center half, drove into the D and squared for Iwan Hughes to sweep home.

A sweeping move by the visitors resulted in a cross from the right, which found a visiting forward who made it 1-1.

Shortly afterwards Andy Farrow found himself clear in the area where he turned and smashed it past the keeper reverse stick to restore Henley’s lead. Just before half-time a goalmouth scramble saw the visitors level the scores.

Henley took the lead again in the second half when Farrow scored his second of the game when he lifted the ball over the diving keeper following a cross from Tim Cima.

Farrow completed his hat-trick and put his side 4-2 up with a shot which went in off the post.

Oxford scored a classy third as their skilful forward connected with a reverse stick shot which went in off the top inside of the upright.

Henley wrapped up the scoring when center forward Iwan Hughes took the ball in front of goal, waited for the keeper and defender to commit, and slotted home

HENLEY 5ths picked up a point in their MBBO Open Division 8 West clash at Reading University where they drew 1-1 with PHOENIX AND RANELAGH 3rds.