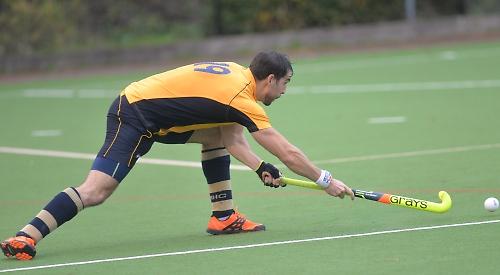 Missing their most experienced back and front line, Henley’s challenge got steeper after a slow start that saw Staines put two early goals past the inexperienced defence.

Despite the setback much of the remainder of the first half remained even with both sides scoring a goal apiece, with Chris Green netting for the hosts who trailed 3-1 at half-time.

The second half saw several opportunities fall to either side, but while Henley were not able to work the Staines goalkeeper, the same could not be said of the visitors.

Goalkeeper Ryan Foggoa made a number of fine saves before being unsighted by a melee of players in front of him as a shot was fired in from the top of the D to make it 4-1.

From then onwards the hosts found it hard to get a foothold in the game as a number of cards did not help their cause.

In Division 4 of the MBBO League HENLEY 3rds ran out 3-2 winners at home against LEIGHTON BUZZARDS 2nds.

In the Open Division 7 HENLEY 4ths eased to a 9-0 win at AMERSHAM AND CHALFONT 5ths.

The impressive partnership of Iwan Hughes, Andy Farrow and Tim Cima was again at the fore as they scored seven goals between them.

The match started with Henley attacking the young home side from the off as Farrow scored with his first touch of the match after just two minutes — his goal taking everyone by surprise when a cross from the right went behind him but the striker managed to reach out and deflect the ball inside the far post.

Shortly afterwards Hughes scored the first of his three goals when he dropped his marker and swept the ball home.

Henley’s third came from a powerful reverse stick shot from the top of the D by Cima, putting the visitors 3-0 up after 15 minutes.

The visitors then eased off a little, allowing Amersham to get into the game. However, the Henley defence and midfield worked hard to keep the home team at bay and, when they did force some short corners and a shot at goal, the defence and keeper, Tom Grocock, were equal to the task, ensuring the visitors got to half time without conceding.

The second half began with Henley scoring another early goal, this time from Hughes who deftly deflected a cross past the home keeper. This was closely followed by a well taken second by Cima as the young home team’s heads dropped.

Hughes wrapped up his hat-trick before Ian Rechner scored the team goal of the game. A ball out of defence was passed through the midfield and forwards, before being pulled back to Rechner at the top of the D, who then calmly slotted his shot home for 7-0.

Henley’s eighth came from a short corner finished by James Rechner, who flicked a shot in just above the backboard.

The scoring was concluded by Farrow, who scored his second as he ran towards the far post and slapped the ball home as it deflected up towards him at waist height.

The win lifted Henley into the top three for the first time this season.

HENLEY 5ths went down to a 4-3 defeat at home against OXFORD HAWKS 7ths in their Open Division 8 West encounter.