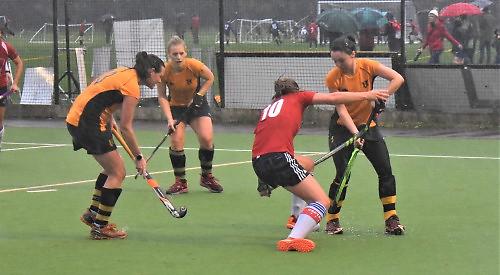 The opening stages of the match were played in good conditions with the ball was moving quickly and Henley had amounted pressure on the opposition.

Some quick interlinking play by Georgie Metcalfe and Kiera Halloran up front caused problems for the defensive line as Henley hit the post early on.

The pressure continued to build and a well performed short corner was not escalated to a penalty corner as it was deemed dangerous by the umpire. This decision frustrated Henley who had had the upper hand for much of the first half.

The pace of the ball slowed dramatically as both teams battled through torrential rain meaning the opposition was able to capitalise on a slow paced game. A fortunate strike against the run of play was nestled into the bottom corner by the visitors with 10 minutes of the match remaining.

Some good play in the middle of the park by both Jem Mackie and Ellie Roseff kept Henley’s hopes alive. Continued pressure on the opposition defensive line and effective turn over was to no avail while Wanderers went 2-0 up through a break in play down the right hand side.