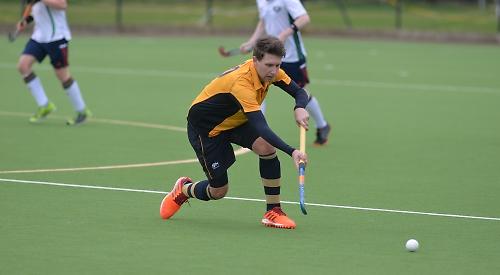 The visitors welcomed back several players into the squad including Matt Riches and Rob Mortimer.

The game started quickly and Henley were immediately on the offence and took the lead after just three minutes. Kevin Jones drove to the baseline before sending the ball to Ed Foster to score his first goal for the season, flicking the ball into the corner of the net.

Chiswick countered and within five minutes of the restart equalised after defender Sam Heaver was caught out by the damp pitch.

Just before half-time the hosts netted again once more to lead 2-1.

The match then turned into a physical encounter as Soulsby took a yellow card mid half and Henley went down to 10 men.

With 10 minutes to go youngster Charlie Shaw won the ball in midfield and drove forward and picked out Foster at the far post to slot home to make it 2-2.

With five minutes of the match remaining good skill from Nico Jean-Jean saw the ball fall to Foster in front of the keeper. Foster deceived the keeper by faking a shot and then flicked the ball into the roof to the net to complete his hat trick.

With one minute remaining Green drove into the D on the right where he had a shot deflected into the path of Foster who scored to complete his first four goal haul in his Henley league career.

In the MBBO Division 1 hosts HENLEY 2nds crashed to a heavy 8-2 home defeat against SOUTH BERKSHIRE 2nds whilst in Division 4 HENLEY 3rds went down 8-0 at READING KNIGHTS.

HENLEY 4ths ran out 1-0 winners in their home clash with LEIGHTON BUZZARD 3rds in their Open Division 7 encounter.