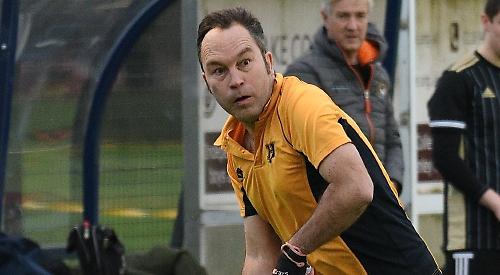 IAN ROBERTS rescued a draw for Henley with the last move of the game against Old Merchant Taylors on Saturday in their MBBO Division 4 clash.

In spite of the mid-season break due to the second coronavirus lockdown, Henley dominated the early exchanges.

OMT tried to break the deadlock but Henley’s defence stood firm with keeper Tom Grocock making some fine saves and the teams couldn’t be separated at the break.

Both sides started brightly after the interval, but it was OMT who struck first with a breakaway goal. A frustrated Henley failed to take their chances to grab the equaliser and OMT doubled their lead. But eventually Henley earned a short corner, which was sharply finished by Holloran with just over five minutes remaining.

OMT strived to shut Henley out for the rest of the game but, with a minute left, Henley’s persistence was rewarded.

A final short corner in the dying seconds of the game was left to Roberts whose shot was fired towards the goal with such ferocity, the goalkeeper was only able to deflect the ball into his goal and the umpire signalled both a goal and full-time.

Henley have been fielding Colts players in key positions during the season and the young midfield of Louis Poundall, Max Hems, Oli Warren and Chris Batey immediately created opportunities for the forward line.

But despite creating pressure, a combination of good goalkeeping and some missed chances meant the visitors failed to score before the break.

Milton Keynes did look threatening on the break but the Henley defence played well and goalkeeper Ed Hems remained alert to snuff out any danger.

Shortly after the break, Henley broke the deadlock when a short corner was converted by Phil Biggs. His strong shot from the top of the D could only be parried by the home Keeper and deflected on to a defender’s foot and into the goal.

This opened the floodgates for Henley and their second came when Max Hems found Farrow on the right-hand side of the D.

Farrow then drove towards goal before striking the ball high into the roof of the net from a tight angle. The game was then killed off by another Farrow strike. Once again, the Henley midfield was instrumental with Poundall, Warren and Batey combining to find Ian Rechner on the left, whose cross was swept in from close range by Farrow.

With 15 minutes to go, the hosts kept trying to push forward and had a couple of short corners of their own in the closing stages but Henley’s back line made several timely interventions to claim a clean sheet.

TILLY CARTER sealed an emphatic win for Henley against rivals Sonning in a friendly on Saturday.

It took both sides a while to get back into their stride following the second covid-19 lockdown but Henley soon found their feet.