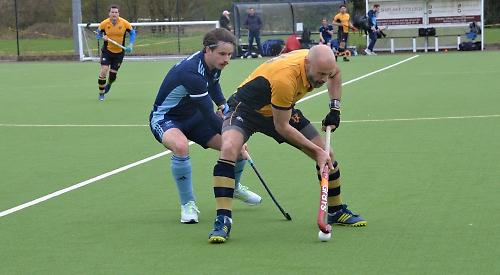 HENLEY 1sts were back on the pitch last weekend for the first time since coronavirus lockdown restrictions were eased.

Their opponents in this friendly were Reading 2nds, who also play in the Premier Division 2 West, but due to cancellations, the sides have not met competitively this season.

The game started well for Henley with Geoff Joseph bundling the ball over the line after good work in the D from player/coach Rhys Joyce.

Captain Jonny Taylor added to the lead, stealing the ball from the Reading defender and slotting into the corner.

After the first quarter, Reading started to find their rhythm and scored two goals on the counter-attack followed by another well worked goal to take a 3-2 lead at half-time.

There was a goal from both teams in the third quarter, including a rocket of a strike from Chris Green at the top of the D after a well worked short corner.

Henley looked the stronger in the tail end of the game and equalised after Taylor found Ed Foster on the back post who hit the ball into the roof of the net. Henley then took the lead with the goal of the game, a passing move from the defence up to the attack. This saw the ball played down the right-hand-side and Joseph executing a piece of skill which set up Green to hit home his second.

Reading grabbed an equaliser in the last few minutes after a well worked attack and the game finished 5-5. Henley 1sts will play in South Central Premier 1 next season, the highest division under the National League. This is a technical promotion given they were in the broader South Premier 2 division last season.

WITH the 2020/21 season announced as null and void, due to the disruption caused by the coronavirus pandemic, all Henley teams have opted to return to training and arrange some friendly fixtures.

It was a relatively even contest for most of the first half with both teams having chances at either end and some excellent goalkeeping by Robyn Horan kept the home side at bay for the first half.

Just before half-time, Henley went 1-0 up thanks to some excellent leg work by Tilly Carter, who attacked the base line, pulled the ball back to returning striker Louisa England, who put the ball in the back of the net.

It was an end-to-end game in the second half, too, with both sides having chances.

However, mounting pressure on the Henley defence gave Reading the opening they needed.

Some soundly taken short corner routines and a converted penalty corner meant Henley were on the back foot.

Henley continued to fight back but unfortunately time was against them and the game finished 3-1 to Reading.