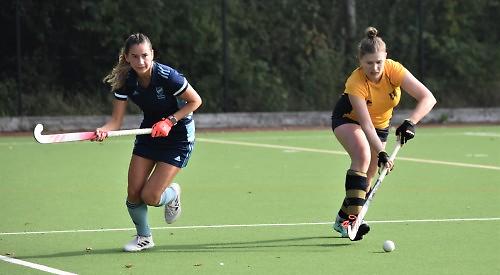 HENLEY Ladies 1sts lost out to a last minute goal in their derby clash with visitors Reading 2nds at Jubilee Park last Saturday.

The hosts won a short corner in the first minute of the game but were unable to convert. Added pressure continued but to no avail.

Against the run of play the young Reading side broke away to open the scoring.

Henley reacted well and thanks to a deflected short corner Kiera Halloran pushed the ball into the bottom corner to level the scores.

Moments later another deflected corner by Henley was netted past the goaleeper by Charlotte Cockerton to put the home side 2-1 at the interval.

Reading applied continued pressure on the Henley defence from the start of the second half and some fine saves by Katy Shaw kept the visitors at bay.

A quick counter-attack led from the back set Halloran on her way and she beat the defender before slotting the ball past the keeper to put Henley 3-1 up.

The match was then end to end before Reading reduced the deficit from a short corner. Soon after the visitors broke on the counter-attack to level the score.

Henley fought hard to get back in front but subsequently exposing themselves at the back and with time running out the visitors broke away once more and scored the winning goal.