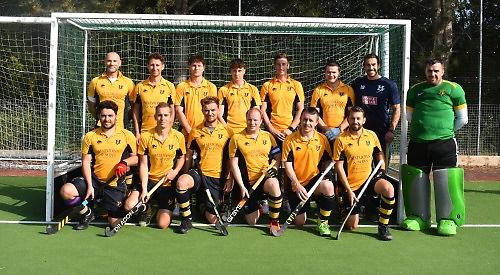 A LATE goal earned hosts Henley 1sts a share of the spoils from their home clash with Banbury at Jubilee Park last Saturday.

The match started at a fast tempo with chances at either end of the pitch. The best chance for Henley fell to Ed Foster, who forced a fine close-range save from the Banbury goalkeeper after being picked out from a Luke Gupta cross.

Moments later Banbury took the lead after a stray pass in midfield resulted in a well-executed counter-attack goal by the away side’s centre forward, who calmly lifted the ball over onrushing Henley goalkeeper Ryan Foggoa. On the stroke of half-time Henley equalised after a skilful one-two between Chris Green and Foster resulted in a first Henley goal for Sam Worlidge, who slammed Green’s through-ball into the Banbury net from the top of the D.

The second half was an even encounter with both teams looking for the win the game.

With seven minutes left to play Banbury forced a penalty counter following a defensive error by the home side from which they managed to score. Henley refused to lie down with captain Jonny Taylor causing numerous problems down the left wing with another successful solo run resulting in a penalty corner to the hosts with three minutes of the match remaining.

Foster stepped up with a powerful drag flick, which was saved on the line by a Banbury player, the ball ricocheting off his stick and over the crossbar.

With 90 seconds left on the clock it was once again Taylor who won another penalty corner for the home side which was converted by Foster into the bottom corner to level the scores.