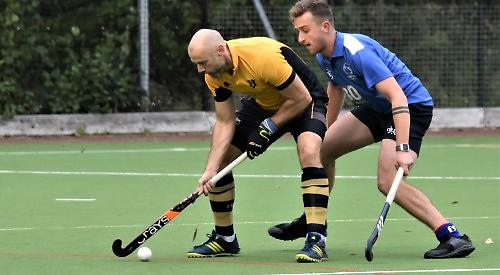 HENLEY 1sts lost out to OXFORD OBU in the their home Premier Division 1 clash last Saturday.

The game started at a fast pace with both sides creating chances. Oxford opened the scoring when one of their midfielders drove through the middle and found a teammate at the post to knock past keeper Foggoa in the Henley goal.

Shaw and Worlidge were finding space further forward for Henley and after an unsuccessful short corner, the second was dispatched on the half-time whistle via a deflection from Sam Heaver, accurately executing to the top of the back board.

Henley were on the front foot for most of the second half with Foster, Green and Gupta creating some good attacking threat.

However, it wasn’t Henley’s day in front of goal and with five minutes to go, Oxford converted a penalty corner with a powerful drag flick to win the game 2-1.

HENLEY LADIES 1sts went down to a 3-2 defeat away at FAREHAM LADIES 1sts in their South Central Premier Division 1 clash.

The game started at a fast pace with both sides creating chances. Kat Green and Pip Sanders worked hard in defence to stop Fareham but after several counter-attacks were broken down the hosts managed to break through to score after a two-on-one situation with Henley keeper Katy Shaw.

Good distributions form Henley’s Jane Dench to Ellie Roseff and Charlotte Cockerton left Fareham on the back foot in the middle of the pitch as the visitors created chances.

However, another quick counter for Fareham led to a short corner which was converted putting the home side 2-0 up.

Despite only having one substitute to Fareham’s five and picking up injuries throughout the game, Henley’s link-up play in the middle of the pitch between Ruth Nutt and Louisa Lynch created more attacking opportunities but the visitors were unable to convert.

Henley eventually pulled a goal back when Kiera Halloran passed to Lauren Hilditch who beat several Fareham players and found Charlotte Cockerton who was then taken out by the home keeper but Hayley Munt was on hand to score.

Henley continued to keep the pressure on in the second half and won another short corner. Ellie Roseff fired the ball to Munt on the post who deflected it home to level the scores.

Fareham managed to win another short corner and converted with 10 minutes of the match remaining to secure the win.