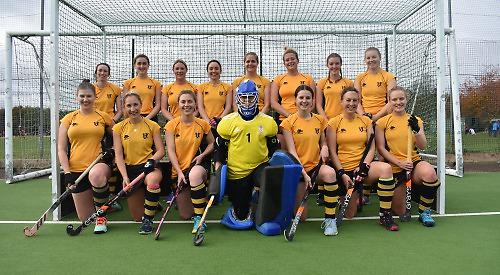 Henley started the game well with pressure on the ball forcing the mistakes from Havant.

One of these mistakes led to Henley’s first goal as Hayley Munt’s strike from the edge of the D went in through the goalkeeper’s legs.

Henley continued to dominate the game with quick passes through the midfield and up to the waiting forwards.

Henley were caught on the counter attack when a Havant player intercepted the ball and sprinted to the other end of the pitch to score.

Henley fought hard and won a series of short corners. With just two minutes of the match remaining a short corner came out to the top of the D and was hit towards the goal but the shot was blocked. The ball fell to Kat Green who flicked it up only for the keeper to get a hand to it and make the save but the ball was deflected to Kiera Halloran smashed it on to the backboard to clinch the win.

HENLEY MEN’S 4ths had to settle for a point as visitors AMERSHAM AND CHALFONT 5ths fought back from three goals down to draw 3-3. Henley opened up the Amersham defence in the sixth minute following good interplay down the right between Phil Biggs and Danny McAllister that allowed Gordon Merrit to open the scoring with a thunderous short-range drive, that left the Amersham keeper with no chance. Henley continued to push and controlled the next 10 minutes with ease and eventually got a well-deserved second as man-of-the-match Danny McAllister waltzed his way around five opponents before slotting home.

The third goal came shortly afterwards on 25 minutes following some strong running by both Eddie Williams and Joe Silvester which led to Henley being awarded a short corner. Ben Williams injected the ball into the D to Jeremy Clarke who drove it hard and low into the corner.

Amersham hit back and scored from a deflection just before the break to make it 3-1.

Henley started the second half slowly and within the first minute Amersham had scored their second from a short corner.

With the flow of the match turning in Amersham's favour Henley pushed forward again through Ben Proudfoot but were repelled.

Eventually Amersham scored an equaliser and shortly afterwards were reduced to 10 men through injury but still Henley couldn’t capitalise as the match ended in a draw.