Harmer and McAllister on target for amber and blues 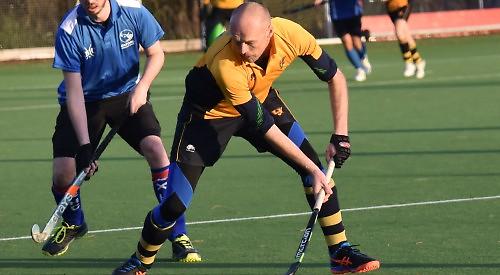 HENLEY 3rds bounced back from the previous week’s defeat with a 2-1 home win against OXFORD 4ths at Jubilee Park on Saturday.

Henley started the match with a strong press to slow down the fast ball pace of the Oxford back four, and dominated the early exchanges.

Henley underwent a period of controlled pressure but deJode and Cheesman looked assured and worked the ball out from the back. This provided the platform for playmakers Roberts and Price to orchestrate an attack, working the ball down the right-hand flank and eventually releasing it forward to Batey who put a delivery into the box which was intercepted by the Oxford defence.

The turning point of the first half came when the Henley youth players of McAllister and Phillips came off the bench to inject some much-needed tempo into the midfield.

Roberts picked up the ball on the halfway line and after seeing off a couple of Oxford players, he bounced a pass to Harmer who released Cottam down the left-hand side. Cottam drove the ball to the D where he then passed to Phillips who pulled the ball back into the middle of the D for Harmer to hit a hard first-time shot past the keeper to give his side the lead.

Price and McAllister continued to link up towards the end of the first-half, with McAllister and Holloran both making runs in behind the defence to try and test the Oxford keeper.

Early in the second half with Barrass and Enzo linking up on the left, it was not long before Henley had another chance at goal, this time Holloran receiving a delicately weighted ball off of Barrass, which was again was kept out by the Oxford keeper.

Once again deJode and Cottam linked up down the right which unlocked the Oxford defence, with a deflection in a crowded D the ball fell to McAllister who did a 180-degree spin with the ball on the end of his stick, releasing it perfectly into the bottom left-hand corner to make it 2-0. This goal inspired Oxford to adopt a more direct game as they pushed players forward in search of a reply. Henley’s defence led by the experienced Nicholson and keeper Grocock held firm and thwarted the advances made by Oxford.

However, Henley were unpicked by a patient Oxford move, manipulating the defence to score a well-deserved goal.

A frustrated Henley side sought to restore their two-goal lead through the reintroduction of Batey into the midfield and chances started to present themselves for both teams.

Henley invited pressure through a lack of discipline and inaccurate passing which led to Oxford gaining the upper hand. Once again Grocock, Nicholson, deJode and Cheesman demonstrated their resilience to ensure that Henley would hold on and secure the three points.