Wilkinson nets brace as amber and blues hit back 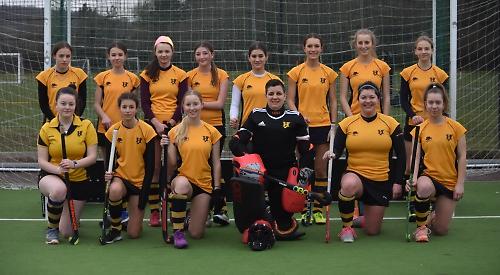 Wallingford put Henley under pressure early on. Tia Wilson directed from the back for Henley and ensured her defensive four were coping with the pressure.

Isabel Woolfrey, making her debut for Henley 3rds, made some good interceptions down the right while Izzie Holden made some quick runs down the left and ensured the ball got out of defence.

The constant Wallingford pressure eventually told as the visitors took the lead after five minutes.

Henley hit back as Katie Lovatt made good interceptions and passes through the middle with Lucy Jean-Jean and Gaby Trombas making fine runs down both sides looking for the forward players.

Henley got the ball into the D many times with Frankie Clarke having a shot well saved by the visiting goalkeeper.

Alyx Clarke worked hard in defence to distribute the ball and eventually a pass down the right made it possible for Rosie Wilkinson to take the ball past a defender to equalise on 33 minutes.

Henley started the second half brightly and used their pace and skill and kept the ball high in the visitors’ quarter which resulted in several short corners that were all saved by Wallingford’s keeper.

Ailish James made some good runs down the left side and looked to pass the ball across into the D, but Wallingford’s defence marked Heley tightly and turned the game over several times. This put the home defence under pressure, but Lily Wylie and Amelie Judge got back quickly to help out.

Wylie intercepted the ball well and distributed it well across the pitch as Esther Garcia saved any shot made by Wallingford.

Maddie Moore played well on the right and stepped towards the ball, intercepting many passes up the pitch from the opposition. Henley continued their fight for a second goal and eventually Wilkinson picked up a pass from the midfield and put the ball into the back of the net to make it 2-1.

Wallingford put the Henley defence under pressure once again but Henley held firm to secure the points.