Jean-Jean’s nets brace as hosts get their revenge 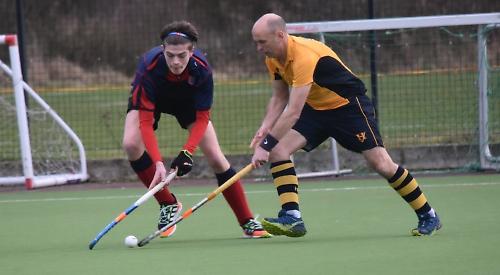 HENLEY 1sts’ five-match unbeaten run came to an end last Saturday as they went down 3-1 away at BANBURY in their South Central Premier League clash.

However, after a loose pass out of defence it was the home side’s centre forward who latched on to the ball and struck a reverse stick shot past Ryan Foggoa in the Henley goal.

Banbury doubled their lead through a short corner, after a rebound fell to an unmarked man in the D, leaving a simple finish.

In the second half Henley threw caution to the wind, this left them exposed to the Banbury counter-attack, resulting in a third breakaway goal on the hour mark.

Henley pulled a late goal back with three minutes to play through Ed Foster, who latched on to a Sam Heaver cross, rounded the goalkeeper before scoring.

HENLEY 2nds recorded a hard fought 3-2 victory in a thrilling match against AMERSHAM AND CHALFONT 2nds at Jubilee Park. Earlier in the season, Amersham had beaten Henley 3-1. Against a young and fast Amersham side, Henley looked rusty from the start, regularly conceding possession and unable to find accurate passes.

After a wobbly opening 10 minutes, the home side soon regained composure and sharper, quicker passing led to a slick move down the left that saw Henley winning a short corner.

This gave Nico Jean-Jean the opportunity to smash a straight strike into the right corner of the goal to give the home side a 1-0 lead.

Following the opening goal, Henley started to exert more control over the game aided by tireless work from midfielders Ryo Arimoto and Mark Harel. Both demonstrated an impressive work rate to harry the opposition off the ball, and were assisted by some robust defending and some sharp saves from goalkeeper Joe Sylvester.

In the second half Jean-Jean started and finished an impressive move with a diving reverse-stick finish to take Henley to 2-0.

Now chasing the game, Amersham continued to press high. A move down the right-hand side saw two missed tackles result in an unmarked forward converting a tap-in at the far post, taking the score to 2-1.

Throughout the game both sides had been putting in some robust tackles, and at this point tempers flared as an Amersham player responded to a stick tackle from Toby Phillips and was sin-binned for his efforts.

With Amersham reduced to 10 players for a period, Henley extended their lead to 3-1 through a neat close-range finish from Heggie.

With five minutes left to play and restored to full strength, Amersham again found space behind Henley’s back line to find an unmarked forward at close range, who converted.