Gupta goal wraps up victory for home side 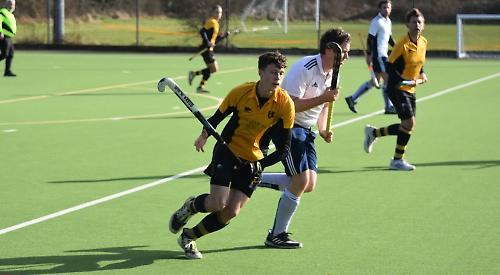 Maidenhead were keen to hit the ground running with a high press and applying maximum effort from the off.

Henley held firm and were having some success down the flanks through Joseph and Worlidge which allowed Henley to do some pressing of their own.

This pressure told, and after a goal mouth scramble, forward Shaw netted to make it 1-0. A short corner drag flick from Maidenhead found its way into Henley’s goal to make it 1-1 at half time.

Early in the second half a ball made it through the defence and a Maidenhead striker skipped around Sutherland’s twisted legs and an oncoming Foggoa to score.

Henley were unfazed and slowly and calmly worked back into the game until a green card for Shaw and a yellow for Riches reduced them to nine men.

The defence stood firm and Henley were rewarded levelling things up after they worked it round the keeper for an open goal strike from leading scorer Foster.

With all the momentum, Henley continued to push, eventually firing the ball across the face of the goal for Gupta to finish.

A tense series of short corners for Maidenhead followed but eventually petered to nothing as Henley held on to secure the points.