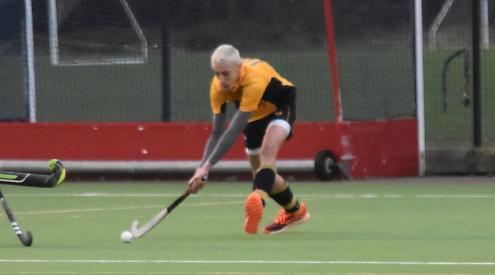 Oxford started the match at a furious tempo with plenty of early possession and movement off the ball which caused some early issues for Henley.

Fortunately, the backline of Roseff, Soulsby, Sutherland, Mortimer, Heaver and Foggoa were standing firm, repelling almost everything being thrown at them.

Eventually the visitors took the lead, pouncing on a loose ball slotting the ball past Foggoa to make it 1-0 with 30 minutes played.

On the stroke of half-time, Henley had a chance to pull level through Ed Foster, who elected to try and pick out Joseph whilst face-to-face with the away side’s goalkeeper. Unfortunately for Henley the goalkeeper smothered the chance.

Slowly coming to grips with Oxford’s dizzying movement off the ball, Henley started pushing higher up the pitch in the second half, winning the ball in dangerous areas and starting to create chances.

Determined pressing drew a series of short corners but these were all kept out by the dogged Oxford defence who have conceded just 19 goals all season.

Henley were not to be denied and with five minutes left on the clock they found an equaliser through Foster, whose initial drag flick was charged down, but the rebound fell kindly downwards and was then rifled into the bottom corner.

HENLEY 5ths went down to a 2-1 defeat at home against WINDSOR 3rds in their mid-table South Central Division 3 Thames clash.

Henley got off to a solid start with midfielder Tommy Lane, James Lane and Clint Botha all pushing well into Windsor’s half.

With play building up and into the Windsor 25-yard line, Henley made some early attacks, but these were thwarted by the visiting defence.

Henley's persistence eventually paid off when Neill Emmett found himself on the receiving end of a long through ball from the Henley defence. Taking the ball along the backline, Emmett offloaded the ball to James Edgell who struck the ball past the Windsor keeper to put Henley ahead.

Windsor stepped up their game, making Henley’s defence work hard to keep them at bay. Defender Ed Bowyer made some good intercepting tackles and with fellow defenders Connor Botha, Jon Williams and Piers Edgell, saw the ball was swiftly despatched back up the pitch.

With 10 minutes of the first half remaining, Windsor scored to equalise when an aerial ball was deflected downwards into the goal behind Henley keeper Dave Bowyer.

In the second half play was evenly balanced. Despite some good positional play and runs from forwards Ollie Paice, Ruper Gutteridge, Duncan Gray and James Edgell, Henley were denied a
further goal by the Windsor keeper.

With 15 minutes of play remaining Windsor managed to score the winning goal.