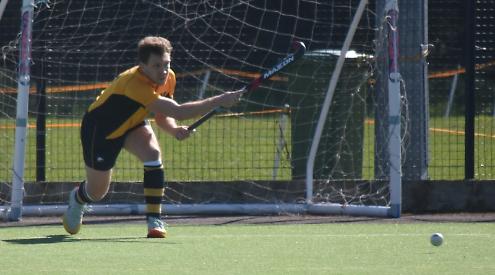 Henley Men’s 1sts have failed to take points off only one team this season — Bournemouth. On Saturday they welcomed them to Jubilee Park, hoping to show them that the defeat away was indeed a one-off.

Henley took to the pitch like a team with a point to prove; the home team piled on the pressure and had several excellent chances early in the first half, with Sam Heaver stealing the ball from a dallying fullback, only for the keeper to save when one-on-one.

With little threat on their own goal, Henley could afford to push up the pitch in an effort to outnumber their opposition in attack. However, it was not until the stroke of
half-time that they were able to break the deadlock. A drag flick rebounded to the alert Luke Gupta, who fired home on the reverse to make it1-0 at half-time.

The second half started much as the first had finished – with the home team pressing for a second and it was not long before this arrived.

A ball from Pete Roseff picked out Chris Green to fire home at close range. On a rare Bournemouth attack, keeper Foggoa collided with a forward resulting in a penalty stroke which was dispatched by Bournemouth to make it 2-1.

A further Henley goal came from a fine move down the left-hand side, with Rob Mortimer venturing forward to find Gupta in space. Gupta looked up into the D to spot the incoming Green, who finished the move calmly to put Henley two ahead. A consolation goal for Bournemouth came in the final few minutes via a short corner, but Henley ran out deserved winners, and in doing so cemented their league position in fifth.