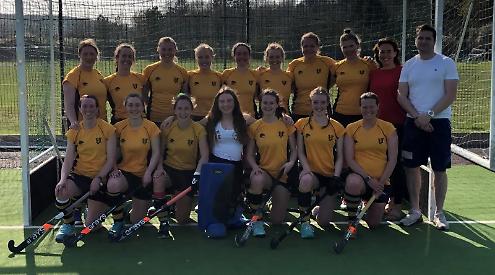 HENLEY Ladies 1st XI pulled themselves out of the South-Central Women’s Premier Division 1 relegation zone with a nail-biting win over Oxford Ladies 1st XI on Saturday.

Henley were at full strength, a rarity this season. Straight from the whistle they proved why they deserve to be in this league.

The Henley front line of Georgie Metcalfe, Hayley Munt and Lauren Hilditch kept pressure on the Oxford defence from the go.

This quickly paid off when Munt overturned possession high up the pitch and slipped the ball to Metcalfe who fired into the goal within a few minutes of the game starting. Henley kept the pressure on with Charlotte Cockerton and Orla Brown in midfield putting in some great tackles, overturning possession and making strong runs several times.

Unfortunately, Oxford ladies bit back with a quick counter-attack despite some great clearances from Henley keeper Katy Shaw. Henley’s defensive line of Kat Green, Mel Joyce, Ellie Boyle, Lucy Herbert and Jane Dench kept calm under pressure and broke down several attempted Oxford attacks at goal. However, Oxford's persistence paid off when they won and converted a penalty corner putting the score to 1-1.

The game continued end-to-end with a fast pace until half-time and the scores stayed level.

The second half saw Henley dominate possession leaving Oxford with only a few counter-attacking chances.

Unfortunately, one of these saw Oxford win a penalty corner that was converted putting the score 2-1 to the visitors.

Continued pressure and skilful runs in midfield from Jem Barham, Emma Joseph, Louisa Lynch and Kiera Halloran kept Henley on the front foot. This soon paid off when Henley won a short corner where Dench slipped the ball to Halloran on the post who scored to make it 2-2.

But this was not enough for Henley who continued to push up the pitch and break down any attacks from Oxford.

With time running out a last-minute penalty corner was awarded to Henley and Kat Green coolly fired the ball home for a final score of 3-2.

Henley Ladies 1st XI will travel away to Winchester for the last game of the season next week.