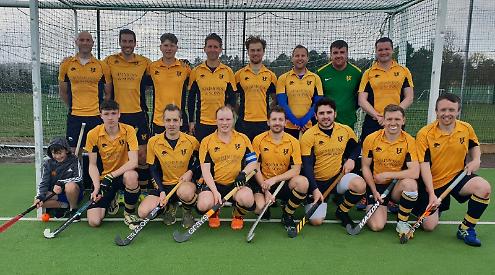 CHRIS Green put in a man-of-the-match performance as he grabbed a hat-trick to help visitors Henley win their final match of the season in a rearranged fixture on Wednesday of last week.

Going into the game Milton Keynes needed a win to avoid relegation and Henley required a win or a high-scoring draw to overtake Reading 2nds to claim fourth spot in South Central League Premier Division 1.

Henley interim player-coach Matt Riches made sure Henley kept their shape and played the patterns that had served the team so well during the season.

The structure of the team was important with Milton Keynes utilising a 4-2-4 formation.

Henley took the lead after 15 minutes when Sam Worlidge slotted the ball into the backboard.

Henley were unstoppable as the second half progressed as they applied the pressure from the front and repeatedly won the ball high up the pitch allowing Riches, Taylor and Foster to release the forwards into the D.

Henley’s all-time top goal scorer Green slotted his first away at the far post before deflecting another on the penalty spot. Worlidge grabbed himself a brace to make it 4-0 after another release from Foster found him with time and space to finish.

Foggoa had little to do in goal for Henley with the exception of a fine save off a bullet strike from a Milton Keynes forward but a defensive error from Sam Heaver led to the home side’s goal.

As the game was coming to a close, Henley continued to push on; captain Jonny Taylor took a quick side-line hit and ran up the left wing before finding Green who smashed the ball into the corner of the goal to complete his hat-trick.

With less than a minute left of the season, captain Taylor gave youngster Phillips the nod to head into the D on the final attack and Phillips sprinted to the far post. The ball was fired in by Mortimer, caught a deflection off a Milton Keynes stick, Foster volleyed on to Shaw who volleyed towards goal where Phillips was ready to volley home on his league debut.