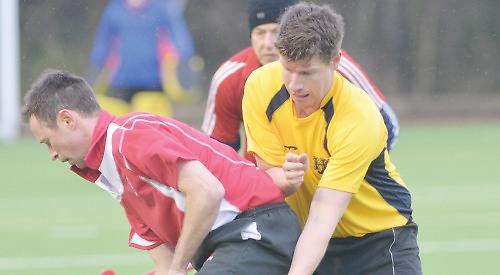 HENLEY battled hard to come away with a point from their Premier League match at Old Cranleighans last Saturday.

The visitors started brightly and dominated the first half which resulted in multiple turnovers made by Steve Harding and Benji Hetherington in midfield, supported well by Rhys Joyce and captain Ed Foster.

After 10 minutes, Henley took the lead after a short corner strike by Luke Gupta stuck an Old Cranleighans’ foot on the line, resulting in a penalty flick which Joyce dispatched.

Five minutes later Henley doubled their lead after a flowing move down the right wing ended up with Sam Heaver dispatching a reverse sick strike into the net. Not content on slowing down, the away side added a third from another penalty stroke following Harding’s attempted effort also being stopped on the goal line by an Old Cranleighans’ foot. Joyce dispatched his second of the day.

The home side pulled back a counter-attack goal on the break on the stroke of half-time.

In the second half Old Cranleighans threw bodies forward, as the 12-man squad of Henley tired. Despite some heroic defending by Hughes-Burne and Rob Rowe, Henley struggled to contain the home side and conceded two goals in quick succession, leaving the match poised at 3-3 with 10 minutes to play.

Despite some half chances created on the break, Henley had little threat going forwards in the final stages, but were resilient at keeping Old Cranleighans out for the rest of the match, earning them a point in the process.

HENLEY 2nds secured their first league win of the season as they beat Old Merchant Taylors 2nds at Jubilee Park.

Lack of availability saw a slightly below-strength home team take to the field where Henley’s stand-in goalkeeper Green pulled off a couple of good early saves.

Insistent and incisive play down the right and resultant pressure applied on the OMT D forced a series of penalty corners. Eventually Henley took the lead from one of these when following a save from the OMT goalie, the ball spilled out to the right and was latched on to by Herbert whose shot made its way past the keeper and Foster-Yeow tucked the ball away.

Further chances came and went without Henley’s tally being increased. OMT also had opportunities but for all their assured build-up play they were unable to penetrate the Henley D with much effect.

On the flanks, Hughes-Burne and Harmer provided pace and momentum and youngsters Newbold and Cheesman impressed with their surging runs and positive outcomes, the latter putting in a man-of-the-match performance up front.

Henley weathered a storm just after half-time, until midfield pressure put OMT on to the back foot once again. A penalty corner following good work down the left provided Ruggiero with the opportunity to send a low flick goalwards which was deflected high above the diving keeper into the OMT net.

With 15 minutes remaining OMT pulled a goal back following a defensive lapse but Henley held on to secure the points.

HENLEY 3rds maintained their fine start to the season as they secured all three points from their high-scoring encounter in north Oxfordshire.

The victory came thanks to a great effort from the Herbert family – father Julian and sons Timothy and Matthew all marking impressive individual performances, scoring four goals between them.

Lacking some key players from recent weeks, Henley’s squad has strength in depth and so the visitors were able to play with typical style and high tempo from the start, playing attacking hockey, constantly harrying the opposition and building fluid attacking moves.

The visitors looked particularly dangerous on the right, with Witney having no answer to the skill, pace and accuracy of Timothy Herbert, Matthew Herbert and newcomer Rob Blair.

The opening goal came from Sam Brown, who pounced on a loose ball in front of the Witney goal. The second came soon after, with Julian Herbert unleashing a flick from a short corner leaving the goalkeeper with no chance.

Brown scored his second with a neat finish following a move down the left. Timothy Herbert then scored two goals in quick succession.

Reeling from the Henley onslaught at 5-0 down, Witney managed to recover impressively as the visitors started playing deeper with less pace, enabling the home side to creep back into the game.

Scoring one goal before the interval, Witney then scored another three after the break to take the score to 5-4. However, belatedly finding a solution to defending against a dangerous aerial ball from the Witney back line, Henley found their composure and reasserted their authority to remove the sting from the Witney counterattack.

Ian Rechner netted following yet another inspired move down the right initiated by Blair and Matthew Herbert took the score to 7-4 with a low flick from a short corner.

HENLEY 4ths moved to joint top of their division with an impressive home win against Bicester at Jubilee Park, maintaining an unbeaten start to the league season after four games.

Starting strongly, Henley were soon ahead from a close range strike from Tim Cima who added two more to complete his hat-trick within the first eight minutes.

Simon Taylor added a fourth within two minutes from a short corner and Henley were coasting at 4-0 after 10 minutes.

The game then began to open up, Bicester creating several chances, before Jules Aplin finished off a flowing move to put Henley 5-0 to the good. Rupert Wiseman added a sixth just before half time with a strong finish.

The second half began to get scrappy with both sides creating chances before Cima netted his fourth of the game.

Bicester’s pressure paid off via a short corner to secure a consolation goal. Jamie Furness wrapped up the scoring for Henley with a shot from an acute angle.