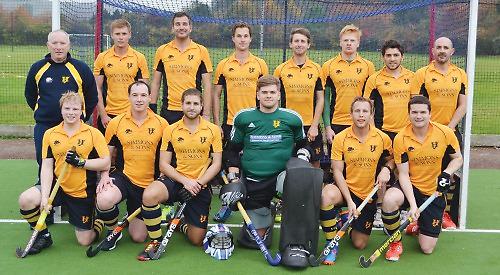 The hosts, donning their newly sponsored shirts, started the match on the front foot playing at a high tempo and after eight minutes their early pressure was rewarded with a goal, as Geoff Joseph pounced on a loose ball in the Milton Keynes D following good play by Ross Hibberd.

With their first meaningful attack, Milton Keynes equalised after a short corner deflection fell to an unmarked man yards from the Henley goal and new recruit Henry Emmett was left with no chance in goal after 12 minutes.

Henley regained the lead five minutes before half-time after good work from Steve Harding in midfield, whose through-ball found ex-Abingdon player Jonny Taylor free in the Milton Keynes D. Taylor, one-on-one with the keeper, went round him, checked back on to the reverse stick side, before placing the ball through his legs to put the hosts 2-1 up.

The home side let their lead disappear for the third time with 20 minutes left to play when a short corner flick nestled into the bottom corner.

Knowing they needed a win to overtake Milton Keynes in the table, the home side decided to throw caution to the wind in order to get all three points.

Strong running from Benji Hetherington in midfield, led to Foster being in space at the top of the Milton Keynes D and he then slipped the ball to Rhys Joyce in space. Despite having a free open stick shot available, Joyce decided to switch to the reverse side and flicked the ball up for himself before firing in off the crossbar.

Milton Keynes equalised once again as the away side found a free man at the far post, who had the simplest of tasks in deflecting a cross into the vacant goal to make it 4-4.

Almost directly from restart, Henley launched another attack. Sam Heaver marauded forward from right-back and slotted a ball through to Ed Foster in the Milton Keynes D. After beating the final defender, Foster dummied a strike, waited for the goalkeeper to hit the deck, then lobbed it over him to give the amber and blues the lead with just three minutes of the match remaining.

However, this lead lasted just 30 seconds after a hopeful strike into the Henley D deflected off Rob Rowe’s stick and into the path of a Milton Keynes attacker. The striker’s attempted hit towards goal wrong-footed Emmett and found its way into the bottom corner to level the scores with 90 seconds of the match remaining.

Straight from the push back, left back Tom Walter threw caution to the wind and played a raking aerial ball down the left wing to Sam Hall. After exchanging passes with Jody Measures, he found Foster on the edge of the Milton Keynes D, who won a free hit on the edge of the area. With time ticking away and just seconds left, Foster dribbled the ball back six metres and delivered a powerful dragged cross towards the away side’s goal where Geoff Joseph’s first touch found him with just the keeper to beat. Joseph drilled the ball high into the net to give Henley the winning goal with just 20 seconds of the match remaining.

HENLEY 2nds maintained their mid-table position thanks to a 3-0 victory at basement side West Hampstead 3rds on Saturday.

With availability stretched for the second week running there were several stand-out performances from Ian Roberts at left back and Guy Harmer in midfield.

Henley started slowly and their lack of ability to create anything meaningful in the way of chances allowed the home team the run of the midfield.

Some stout defending from Clarke and a couple of routine saves from Bowyer in goal denied the hosts early on though once they started playing they found the West Hampstead keeper to be in good form.

The visitors broke the deadlock when Herbert’s drive along the baseline forced a clumsy challenge, giving Henley the chance from a penalty corner which was converted by Woolfrey. In the second half Henley failed to take their chances. However, as the half went on Pollard slotted in from the left at a well-worked penalty corner to make it 2-0. The scoring was wrapped up when Foster-Yeow netted from close range.