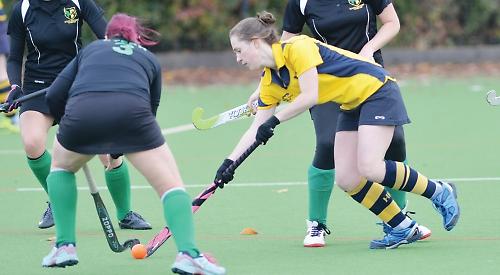 VISITORS Henley were made to rue missed chances as they gifted West Hampstead their first win of the season in north London on Saturday.

The opening stages of the game were dominated by Henley but their control of possession failed to create any decent chances on goal.

Midway through the half Henley suffered a lapse in concentration in their defence which led to West Hampstead converting their only clear-cut chances on the Henley goal as they went 2-0 up.

Henley managed to pull one back before the break following a well crafted short corner routine. Georgie Metcalfe slipped the ball to the edge of the D where Kat Green’s disguised pass allowed Louisa England to apply the finishing touch.

The second half was one-sided as the hosts fought hard to defend their single goal lead. Henley executed fluent patterns of play straight off the training pitch and despite a stream of short corners were unable to find an equaliser.

Going into the match Henley had picked up just one point and scored one goal this campaign since their relegation last season.

With a squad of 15, Henley took a while to settle against the unknown quantity of South Berkshire 3rds, a new club formed from the merger of Wokingham and Bracknell over the summer.

South Berkshire attacked strongly and Henley were forced to defend several short corners in the first half. The rotating defence of Catherine Brown, Lauren Sidgwick, Anna Wray, Kiri Cheesman and Izzy Smith held strong and the match became much more even with forwards Ella Shute, Wendy McLoughlin, Meg Hearn and Kayleigh Scott starting to put pressure on the South Berkshire defence. Rosie Wilkinson made some good attacking runs on the right and the team forced several saves from the South Berkshire keeper.

In the second half the midfield of Beccy Barry, Morgan Hanson and Danielle Moraviec gelled well and worked tirelessly to support both the defence and the forward line. Orla Brown had a strong shot on goal ably saved by the South Berkshire keeper but Brown’s reaction was quick and she managed to slot the rebound over the line to give Henley the lead.

South Berkshire did not give up and the game continued to move from one end of the pitch to the other. The visitors had several more attempts on goal but these were competently dealt with by keeper Harriet Lewis.