Hosts suffer second successive loss after being hit on the break 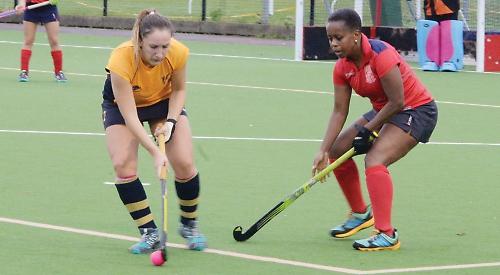 HENLEY Ladies 1sts suffered their second consecutive defeat as they went down 4-2 in their Division 3A clash against Eastcote at Jubilee Park on Saturday.

After a solid start, Eastcote broke early and scored first from a near post strike. Henley hit back, but found themselves battling with another quick Eastcote break into the D, with the visitors managing to double their lead with another goal following a far post deflection.

The start of the second half saw Henley play a much more composed game with some good link-up play down the right-hand side that saw Green and Draycott setting up a well-worked attack.

However, it was Eastcote who netted next as they attacked and managed to obtain a short corner, which they converted to make it 3-0. Henley drove straight back with a good passage of play with Lou England managing to score from a deflection.

The hosts pulled another goal back, this time by midfielder Jem Barham. Trailing by just one goal Henley had several entries into the opposition’s D, but were unable to convert into goals.

It was against the run of play that Eastcote broke again and a miss hit by the attacker from top D, managing to lob both keeper Lavish and defensive woman Herbert to score the visitors’ final goal of the game.

HENLEY Ladies 2nds claimed another three points with a win against local rivals Reading 3rds, a result that moved them two positions up the league table.

Despite the wet conditions Henley made a good start by applying pressure early on and were rewarded with a number of short corners but these couldn’t be converted.

Some good passages of play down the wings by Sophie Rainbow and Sophie Thompson kept the ball in the opposition’s half. A few quick breaks by Reading were soon dealt with by Katie Knight and Rosie Kemp, who looked to send the ball wide for the pass up the line.

Continued determination in the midfield by Rachel Herbert and Emma England gave Henley another opportunity for a goal from a short corner. The ball was passed across the goal and saved by the goalkeeper but Herbert capitalised on the rebound sending the ball into the back of the net.

Henley continued to dominate in the second half with many goal-scoring opportunities set up by Sarah Drummond and Taminah Brown.