Henley side are second best after being hit on the break 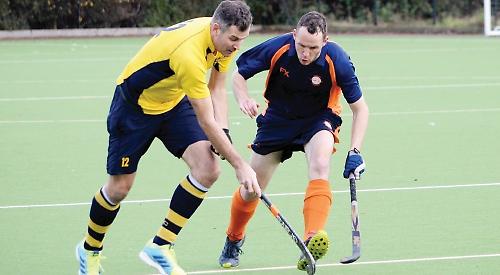 AN injury-hit Henley 1sts side crashed to their heaviest defeat of the season as they went down 8-0 at Oxford Hawks in last Saturday’s Premier Division 1 encounter.

The visitors struggled to compete with Hawks’ slick passing, who were clinical in front of goal as they converted eight of their 10 shots on target.

Henley lost George Warrender before half-time with a dislocated shoulder in a day to forget for the amber and blues.

Henley will continue to be without Alex Land (thigh) and Robbie Mortimer (ankle) until after the Christmas break.

HOSTS Henley 2nds put in a below-par performance as they went down to a 4-2 defeat at Jubilee Park against Phoenix and Ranelagh in their MBBO Division 1 clash.

The first 20 minutes saw a lack of recognition of game context resulting in poor marking, naïve defending, miscommunication, and no structure by the hosts.

Phoenix capitalised on this early, exploiting gaps between the midfield and defence to either distribute from or play through. The visitors appeared to have the run of areas in just outside the Henley D to pick passes to players inside it, and the pressure soon got to Henley as panicked defending gifted Phoenix their first goal with simple tap-in on the far post.

The home side did manage to organise themselves from time to time to create attacks down both the left and the right flanks which resulted in some bright spots.

Cheesman cemented his role as the high central midfielder with a typically energetic and skilful display that harvested possession and pressure. An example of this saw him turn sharply and drive strongly into the D to win a penalty corner, from which the returning Ali Slay was on hand to launch the ball low. The parried save was swept up by Hughes-Burne to bring the scores level.

Moments later the good work was undone after a winding dribble by a Phoenix midfielder found him on the left of the Henley D with no option but to flick the ball towards the goal. The ball was plucked out of the air by Roberts only to see it drop into his own goal.

Any embers of a Henley fightback at this point were snuffed out when a Phoenix cross found its way to the back post for a tap-in.

Trailing 3-1 at half-time, Newbold joined Ruggiero in midfield in the second half and with surging runs and passes helped the hosts to build some momentum. This finally paid off after sustained pressure found Woolfrey in front of goal to squeeze the ball between
the keeper’s legs to make it 3-2.

The scores were almost levelled soon after but Pollard blazed the ball high over the bar from distance.

With Henley chasing an unlikely draw gaps appeared behind the midfield again. With just seconds to go the Phoenix forward found himself one-on-one with keeper Bowyer who came out to narrow the angle only to see a miss-hit shot loop over him into the net.