England strike not enough as side lose way on their travels 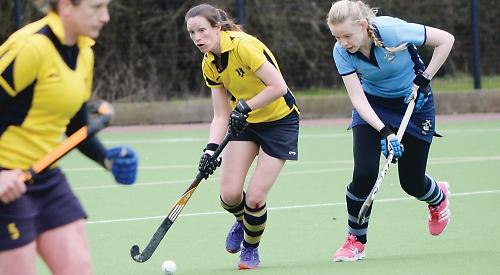 VISITORS Henley Ladies 1sts went down to a Division3A 2-1 defeat at Milton Keynes on Saturday.

Henley settled straight into the game with exciting play down the right hand side led by Kat Green, captain Georgie Metcalfe and Emma Buckham-Hedges.

Milton Keynes hit Henley hard, knocking players off their feet and piling pressure onto Henley’s attacking play. The amber and blues dug their heels in and with controlled, tactical play through the middle of the pitch by Jemma Barham, Ellie Roseff and vice-captain Louisa England, the ball soon found the back of Milton Keynes’ net scored by England.

In the second half Milton Keynes attacked hard and fast. The repeated onslaught tired Henley and the hosts won several penalty corners and were able to level the scores. For a 15-minute period Henley found themselves shaky in their play which the opposition capitalised on, finding a fracture in the visitors’ defence and scoring.

Henley pushed for an equalised led by forwards Charlotte Cockerton, Billie Moore and Buckham-Hedges as they repeated attacks across the pitch, supported by midfielders Katie Butler and Mel Joyce.

The visitors won a flurry of penalty corners but their well-rehearsed routines failed to deliver as they returned home empty handed.