Why dad's jealous of his girls losing their locks 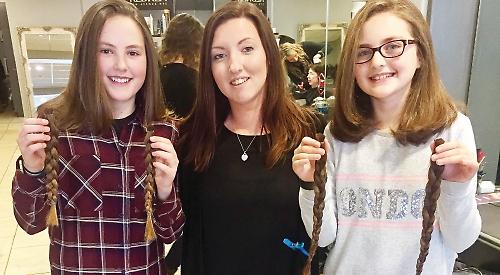 THE father of two Henley girls who donated more than half a metre of their hair to charity says he is very proud of them... but also a bit jealous.

Annabel and Jessica Smyth had their locks chopped for the Little Princess Trust, which provides real hair wigs free of charge to children who have lost their own hair due to cancer treatment or other illnesses.

Annabel, 11, a pupil at Rupert House School, said: “I managed 13 inches and my sister 8in but it should all help to make a brand new wig for some boy or girl.”

Jessica, 13, who attends Gillotts School, said: “Hair is such an important part of your identity so donating our hair will hopefully make some boy or girl so much happier.”

Their father Paul, who lives with the girls and their mother Becky in Friday Street, said: “The minimum requirement for donations is 7in, which for a man who is follically challenged is a heck of a lot of hair! They both looked priceless but I am very biased.”

The girls had their hair cut by Kate Richardson, a stylist at Rudi Kartal in Duke Street.

Mr Smyth, 45, said: “I was nervous for them in the sense of suddenly having a radical hairstyle like that and the reality when it kicks in. Other than that, I’m jealous they can grow that much hair in the first place!”

The girls were inspired to grow their hair and donate it to the charity after seeing the effects of cancer treatment on their grandmother’s hair.

Mr Smyth, who works for advertising agency M&C Saatchi, said: “Radiotherapy and chemotherapy both have an impact on your ability to grow hair and it does make a difference in terms of identity, how you’re perceived and how you feel about yourself. I think the girls felt this was something they could do quite easily and could make a real difference to some boys and girls out there in a very different situation to them.

“It’s very sweet and I’m very proud of them for doing it.”

He said he had noticed a beneficial change in the girls’ routine since losing their locks.

Mr Smyth explained: “We’re not having to spend 10 minutes every morning brushing hair, which was a massive burden. It’s much quicker.”