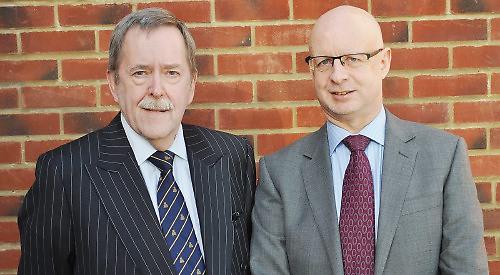 THE chairman of South Oxfordshire District Council has been thrown out of the ruling Conservative group for criticising planning officers.

Paul Harrison accused the staff of “looking out for their own jobs” while speaking at a public meeting.

He was asked to apologise and when he refused, members of the group voted to expel him indefinitely for an “unacceptable” breach of the councillors’ code of conduct.

Councillor Harrison, who represents the Sonning Common ward, is likely to be taken off committees and will not be allowed to substitute for his former party colleagues at meetings.

He will remain as chairman of the council, which is a ceremonial role, until May.

His expulsion comes as his Conservative and former ward colleague Martin Akehurst resists a call for him to resign from Henley Town Council over his attendance record.

Cllr Harrison spoke out at last month’s meeting of Sonning Common Parish Council, saying he feared the village’s neighbourhood plan was being ignored by the district council.

He said: “The planning department is too large with too many officers who are more interested in seeing developers as their customers rather than the residents of South Oxfordshire.

“They’re looking out for their own jobs and throwing the rest of the district away.”

Cllr Harrison, who lives in Sonning Common, was called in front of the Conservative group on Wednesday last week, the day before a full council meeting.

He was asked by council leader John Cotton to apologise to the authority’s chief executive David Hill for his comments but he refused.

Cllr Harrison told the Henley Standard: “I was not prepared to do that because I felt that my statement was truthful. It was all due to my comments. I was asked if I stood by them and I said ‘yes’. At the end of the day I am elected by the residents of the Sonning Common ward and I am there to speak on their behalf. As far as I was concerned, I was speaking about my feelings.”

About 25 members of the group attended the meeting and voted by a majority to suspend him.

Cllr Harrison said: “At the end I was called back into the meeting and told the result.

“Some people were against me but others were supportive, particularly on the issues relating to neighbourhood plans. The issue I have with those meetings anyway is they do not discuss the future. It is the cabinet saying what they have already decided.”

Cllr Harrison’s suspension comes as the district council is about to decide whether to approve two applications for 125 homes in Sonning Common, which are opposed by the parish council and residents but being recommended for approval by planning officers.

The sites, both off Kennylands Road, have been earmarked for a total of 48 homes in the village’s neighbourhood plan, which was approved in a referendum in September.

The former application is due to be considered by the district council’s planning committee at a meeting on Wednesday, when a large number of villagers is expected to attend.

Cllr Harrison said he still felt that neighbourhood plans were being “overridden” by planning officers.

“It’s an issue we have across South Oxfordshire,” he said. “The misinterpretation of neighbourhood plans by the district council has affected Henley and Sonning Common.

“The officers are interpreting plans differently to how they were set out by the residents who put the time into making them.”

She said: “I understand his views but he did breach the code of conduct. He is chairman of the council and should stand up for his officers who do a good job but are restricted with planning policy.

“With planning there is always a winner and a loser and difficult decisions have to be made.

“We have seen two care homes in Henley, which I voted against, and you leave the meeting absolutely gutted if you have not got your way.

“Paul is very passionate about his patch and it’s very, very hard when decisions go against you. I don’t think he should be suspended as he is a very hard-working and intelligent man.”

In a statement, Councillor Cotton said: “Cllr Paul Harrison’s comments about the motivations and actions of planning officers, made at a public meeting, were wholly unacceptable.

“Although scrutiny and criticism of the council's activities are a vital part of our democracy, personal attacks on those unable to answer back have no place in public life.

“As chairman of the council, Cllr Harrison should have known that far better. Since he has declined the opportunity to issue an apology, and following a discussion and vote within the Conservative group, Cllr Harrison has been excluded from that group with immediate effect and will no longer sit as a Conservative councillor.”

Cllr Harrison, who is single and has worked in the IT industry for almost 40 years, has lived in Sonning Common ward for more than 25 years and he represented the area on the district council since 2004.

He was also a parish councillor for 10 years, from 1995 to 2000 and from 2003 to 2008. Between 1999 and 2003 he was a district councillor for Henley. During the Nineties he was South Oxfordshire planning co-ordinator for the Chiltern Society and also served on the Sonning Common Open Spaces Trust’s management committee.

Before his re-election in May 2015, he said: “One of the greatest risks to our ward is a potential land grab of our parishes by Reading. I will resist such a move as it would destroy the nature of the place we love.”