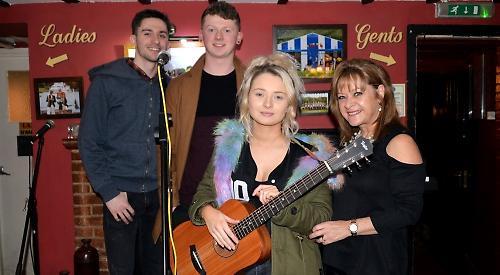 A WOMAN who is about to run her first half marathon for charity raised £360 at a live music night.

Karen Michel will be taking part in the 13.1-mile Vitality North London race, which starts and finishes at Wembley Stadium, in aid of Macmillan Cancer Support next Sunday.

The 57-year-old, who lives in New Street, Henley, with her husband Trevor and daughter Georgia, is supporting the charity after its nurses cared for her mother June in her final days.

She has given a monthly gift for the past four years but wanted to do something special and decided to challenge herself as she is a keen runner.

Mrs Michel enrolled for the half marathon just before Christmas and has been training several times a week since then.

She runs up to miles at weekends with shorter runs during the week.

On Saturday she and her daughter organised an acoustic gig at the Row Barge pub in West Street, Henley, which was attended by several dozen people, including her personal trainer Becky Hill.

Georgia, 19, who is currently studying a BTEC in music at Reading College, performed several of her own songs and cover versions, including Dolly Parton’s Jolene. Aaron Tull-Dare played covers of pop and classic soul songs including Ed Sheeran’s Sing and The Wind Cries Mary by Jimi Hendrix.

There was also a raffle with prizes donated by the River & Rowing Museum, the Row Barge, the Red Lion, Pizza Express, Waitrose and Pachangas, all of Henley, as well as the Chocolate Factory in Wargrave, BSTLFE and Metaphysical gym, near Hambleden, and the Chiltern Valley Winery, near Skirmett.

Mrs Michel said: “It was a great night. People were singing and clapping along and we had lots of great feedback on Facebook afterwards.

“I’m also really happy with how much it made and thankful for everyone’s generosity.”

Mrs Michel, who has raised an additional £353 from other sources, hopes to finish the half marathon in under three hours. She has previously only taken part in 5km evens and said: “I’m actually feeling pretty nervous but my trainer is confident that I’ll do it.

“I’m quite competitive so that should give me an extra push.”