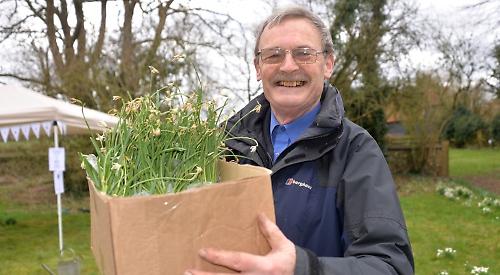 ABOUT 400 people attended a free snowdrop-themed open day at All Saints’ Church in Dunsden.

The event, which took place for the first time on Sunday, included a regular church service with readings about flowers and nature.

There were also guided tours of the building and readings plus refreshments including home-made cakes.

Clarinettist Dennis Saunders, of Gillotts Close, Henley, performed for several hours and took requests from visitors. There was also a recital by madrigal group the Acorn Singers.

Visitors were able to learn more about the Wilfred Owen Trail, which was launched in 2015 to honour the First World War poet who lived in the village from 1911 to 1913.

Freshly-picked snowdrops were on sale with proceeds going towards the maintenance of the church windows and to fund a new window themed around Owen’s life and works.

The day, which also marked the 700th service of long-standing church organist Philip Bowcock, was organised by John Bodman, a former All Saints’ churchwarden and regular worshipper who has spent the past decade planting snowdrop bulbs around the churchyard.

He proposed it to Rev Robert Thewsey, the rector, shortly after his appointment in October.

Mr Bodman said: “It was absolutely tremendous. It could not have gone better and I was delighted with the turnout.

“When I first had the idea, there were only scattered clumps of snowdrops here and there in the churchyard so it has taken a while to bring it to life. A few were damaged by wind earlier in the month but they were still largely in full bloom on the day.

“The atmosphere was wonderful and people were very generous. We’re very keen to reach out and show the wider community what the church is like in the hope that they may join us one day.”

The day is expected to have raised several hundred pounds.