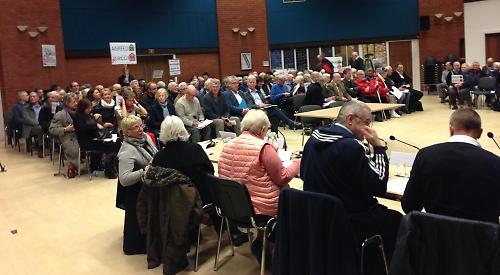 PLANS for 95 homes in Sonning Common have been rejected following protests by villagers.

Sonning Common Parish Council had organised coaches to take residents to the meeting to oppose the plans by Gallagher Estates to develop land off Kennylands Road that is earmarked for only 26 homes in the village’s neighbourhood plan.

When the result was announced the protestors cheered and applauded.

Speaking after the meeting, district councillor Paul Harrison, who was expelled from the Conservative group for critising planning officers, said it was an excellent result.

“Any other decision would have destroyed neighbourhood plans in south Oxfordshire,” he said.

“It’s a hard fight because developers are looking for gaps. I think memebrs of the committee voted against because they realized what an impact it could have on their areas and neighbourhood plans.”

Parish councillor Leigh Rawlins, a member of the working party that compiled the plan, added: “I think any other result would have killed neighbourhood plans across the country.

“The unanimous verdict was compelling. I think it would have been rejected by the Secretary of State anyway.”

But villagers and parish councillors opposed the development, saying it would increase traffic, disturb residents and destroy the character of the village as well as being a loss of open green space.

Planning officer Phil Moule had recommended the plans for approval.

In report to the committee, he said the plans did “not fully accord” the neighbourhood plan and planning permission should not normally be granted.

However, in order for there to be a “robust and defendable” reason for refusing the application, the resultant harm had to be demonstrated.

He said there would be no demonstrable harm on landscape grounds or on highways, ecological or forestry grounds that would warrant refusal.

The development would also comply with the district council’s requirements for the provision of affordable housing and “help to enhance the viability of existing services in the village”.

Last week, the Henley Standard revealed that Councillor Harrison, who is chairman of the district council, had been expelled for accusing planning officers of “looking out for their own jobs”.

Cllr Harrison, whose ward is Sonning Common and who lives in the village, said there were “too many officers interested in seeing developers as their customers rather than residents of South Oxfordshire”.

This week, the chairmen of six parish councils in the ward have written to the Henley Standard to say Cllr Harrison had been championing the rights of residents and was upholding the value of local democracy.