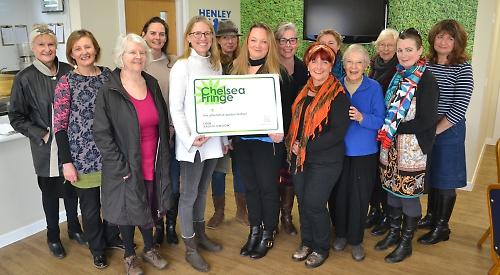 A POP-UP Japanese garden and poetry in an orchard are set to feature in this year’s Chelsea Fringe Henley festival.

The new events were revealed at a meeting hosted by co-ordinators Victoria Newton and Jane Macfarlane Duckworth for people wanting to help out.

About 20 people attended the meeting at Henley Rugby Club, including representatives of Henley Town Council, Berkshire College of Agriculture, the Henley Quakers and the Thames Valley Orchid Society as well florists, gardeners, artists and volunteers.

Chelsea Fringe is an alternative festival of flowers, gardens and gardening which runs concurrently with the main festival and beyond from May 20 to June 4.

Mrs Newton, from Peppard, said: “The idea behind the fringe was to set up a festival which was much more accessible for people and inclusive.”

Ms Macfarlane Duckworth, from Hambleden, added: “It’s a wonderful idea and people have just grasped it and run with it. It has got to have a quirky side to it, it’s not just about opening up your horticultural business.

“There are a lot of people locally who have got a lot of horticultural expertise but it’s not necessarily brought together under one umbrella. Hopefully, this can be a fun, informal way of doing this.”

The festival will begin with an open day at Bablyon Plants in Cuxham on May 20 and a performance by a woodwind quintet at 4.30pm.

An ikebana event, the Japanese art of flower arranging, will be held on the same day in Oxford.

A heritage day will be hosted by the Berkshire College of Agriculture in Burchetts Green on May 21 where Hall Place, its Grade I listed building, and the gardens will be open to the public.

A “grow your own, cook you own” event could be held at Phyllis Court Club in the week commencing May 22 with nutritionist and pilates instructor Ruth Green.

Pilates in the garden is another event scheduled for that week but a venue is still to be confirmed.

A flower market and plant sale will take place in Henley Market Place on May 27 with the help of Henley Allotments Association.

The festival will close on June 2 with a floral flotilla on the River Thames between 2pm and 4pm, beginning and ending in Mill Meadows, where band will perform on the bandstand.

A date has not been set for the pop-up Japanese garden but it will be run by the head gardener at Friar Park and be held in the courtyard at King’s Arms Barn.

A meditation event could be held in the Quaker meeting house garden with Henley Churches Together.

A poetry event may also be held in the orchard at Dunsden Green, but a date is yet to be confirmed.

Other ideas include a community feast, where people bring dishes created from produce they have grown, and a green trail garden walk.

Registration is now open. Visit www.chelseafringe.com or call if you have an idea for an event or would like to volunteer Ms Macfarlane Duckworth on (01491) 575603 or email jane88@hotmail.co.uk or call Mrs Newton on (01491) 629636 or emailvictorianewton@me.com