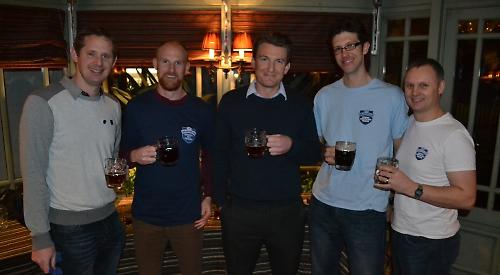 MORE than 50 beer lovers who completed the Brakspear ale trails attended a party at the Little Angel pub in Henley.

The pub company has four trails — one involving 10 pubs in Henley and three country trails aimed at walkers and cyclists, each with 10 pubs across South Oxfordshire.

Drinkers who get their trail map stamped at each pub can claim a free
T-shirt once they have visited all 10. The invitees at the fourth annual trail party enjoyed free beers including some brewed at the company’s mini-brewery in Bell Street and live music performed by local covers group Highly Strung.

Brakspear marketing assistant Kate Thomas said: “Everyone had to complete an ale trail to be invited.

“In 2016 we had 1,300 ale trailers, which is double the total in the previous year so it’s becoming a bit more popular. People can go on the trails throughout the year, so they can take their time.”