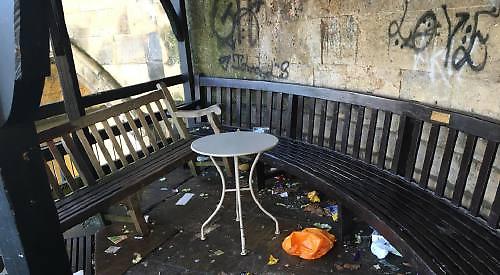 THE mother of man who died attempting to swim across the River Thames in Henley is “horrified” that the riverside beauty spot she visits to remember him was vandalised.

Teresa Beddis went to Red Lion Lawn, where there is a bench with a plaque in memory of Peter Redding, but was so upset by what she saw that she left and has not returned since.

The area was strewn with rubbish, a bench had been ripped from its fittings and graffiti had been sprayed on the Grade I listed Henley Bridge.

The damage came to light last month when pictures of the vandalism were posted on social media, sparking concern among residents and town councillors.

The Red Lion Hotel leases the site from the town council to serve customers refreshments but it has been closed and the gate locked since the vandalism attack.

Mrs Beddis, 65, of The Hamlet, Gallowstree Common, said: “I was glad that I wasn’t the only one who was disgusted with it. With the attachment I have to the area you might think I’m overreacting but, of course, I wasn’t.”

She said that she couldn’t believe her eyes when she last visited.

“I was really quite horrified, to be honest, and quite upset,” said Mrs Beddis. “I just had to walk away, I was really upset. I’ve not been back since and I won’t go back until it has been cleaned up.

“When you have lost someone and you have put something special there, it’s kind of like an assault on you. I had to walk away, I couldn’t stay there.

“The fact that another memorial bench had been unscrewed from its place and moved was very distressing for me, let alone the people who put it there.

“I go down there throughout the year. I regularly sit, take a rose and I’ve been doing that since Peter died. It’s a beautiful, tranquil place to go.

“The place would be absolutely immaculate in the summer but it definitely deteriorates in the winter.”

Mr Redding, from Tilehurst, Reading, died in July 2013 while trying to swim across the Thames during a night out.

He drowned after stripping down to his underwear outside the Angel on the Bridge pub before entering the river.

The car salesman had been out celebrating a successful sales week with colleagues from Audi Reading.

A plaque in his memory was installed on a bench soon after his death and bears his name and the phrase “you’ll never walk alone”.

Mrs Beddis said: “The Red Lion do keep it really clean and I have to be full of praise for them as they have always accommodated me. It’s the place I can be closest to Peter because that’s where he went in the river in his wisdom.

“I want to be able to go down there for his anniversary and have a get-together with the family but there’s no way we could do that as it is.”

Mrs Beddis said waste bins at the site were not emptied regularly during the winter and this encouraged litter, while visitors would not want to sit among the rubbish.

“I don’t think it would have got to that stage if they had emptied the bins,” she said.

“Everyone has a right to use it, but I don’t think they should be defacing it. I have met so many people down there, both visitors and locals. I have left flowers and found cards left for me and generally found it a very peaceful place to be.”

Town manager Helen Barnett said: “We do have a slightly undesirable bunch of youths who have been using that area and that’s why it’s locked but it won’t be locked indefinitely. I think it’s a phase that will pass.

“I believe the police are now monitoring that area much more regularly and we’re trying to monitor the CCTV around the area to ensure everybody is safe and nothing happens again.”

The council’s parks services team cleaned up the area following the attack by clearing the litter, securing the bench and removing the graffiti.