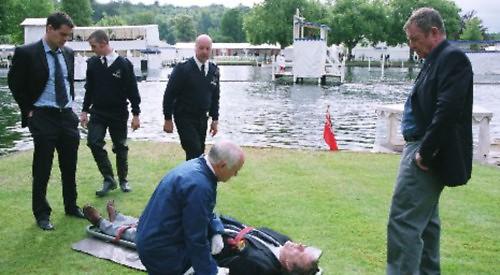 BUSINESS owners were given a tour of locations in Henley which have appeared in Midsomer Murders.

They walked in groups along New Street, Thames Side, Bell Street, Hart Street, Duke Street and Market Place and stopped at seven places where the ITV drama series has been filmed.

The tour started at the Hotel du Vin in New Street, the outside of which has appeared in several episodes, before walking along the River Thames to Henley Bridge.

During the 2004 Henley Royal Regatta, crews filmed several scenes on the Henley reach for an episode called Dead in the Water, which took place at the Midsomer Regatta.

The opening shot depicted the regatta site from the bridge while DCI Tom Barnaby and his wife Joyce, played by John Nettles and Jane Wymark, were shown enjoying a picnic on the riverbank.

In the episode, a race at the regatta is interrupted by the discovery of a body which turns out to be that of Midsomer Rowing Club’s chairman and Barnaby, who was attending for pleasure, is pressed into action.

Five-time Olympic gold medallist Sir Steve Redgrave, who is now the regatta’s chairman, made a cameo appearance as himself.

The tour then passed the Cau steak restaurant in Hart Street, which appeared in the 2005 episode Down Among the Dead Men.

At the time, this was the La Bodega restaurant, which was renamed Café Vintners for the show.

Barnaby was shown purchasing drinks there while attempting to solve the murder of a parish council clerk.

The group then moved on to the Argyll pub in Market Place, which featured in the episode Last Year’s Model in 2006.

Barnaby and his sidekick Sgt Ben Jones, played by Jason Hughes, dropped in for a pint while consulting a psychiatrist for help defending a woman wrongly accused of murder.

Landlord Neil Ainsworth has put up a brass plaque to commemorate the filming and launched Midsomer Ale in 2014, which tourists can pour for themselves.

He says up to 100 people visit the pub every week in the summer because of the Midsomer connection and that Hughes occasionally returns for a drink. The tour also passed Tudor House Antiques in Duke Street and butcher’s Gabriel Machin in Market Place, the exteriors of which featured in the episodes A Sacred Trust (2012) and The Magician’s Nephew (2009) respectively.

For the latter, Machin’s was temporarily renamed Anton Thorneycroft’s. The group stopped at the town hall, which doubled as Causton court house in Last Year’s Model and as an auction house in the 2009 episode The Black Book, which centred on the deaths of several owners of rare artworks.

A house on the corner of West Street and King’s Road featured as the outside of a solicitor’s office in Down Among the Dead Men. The morning was organised by Henley Town Council as part of a campaign to help businesses make the most of tourism related to Midsomer Murders.

It also included a seminar at Hotel du Vin where participants could exchange ideas.

Tourism consultant Sarah Osborne, who led the event, said: “Everyone really enjoyed it and I think some people learned a lot as they didn’t realise how closely Henley was connected with Midsomer.

“We started running Midsomer tours of Henley last year and they were a huge success in pulling international tourists away from the usual places like London.

“People love it because it’s so quintessentially English and it’s not just about one or two specific locations. They feel like they’re in Midsomer just by coming here, so every business can benefit.”

The Loddon Brewery at Dunsden also appeared in the 2011 episode The Night of The Stag in which a tax inspector is murdered and dumped in a cider vat.

The brewery now produces its own Night of the Stag beer and attracts scores of Midsomer fans every week during the summer.

Other places to have appeared include the Crown Inn, Crown Garage and the RAF base at Benson, the Henley Business School at Greenlands, near Hambleden, the Leatherne Bottel restaurant at Goring and St Nicholas’s Church in Remenham.

l Midsomer guided tours in Henley will begin on Saturday, March 18. The tour will begin at 11am inside the Argyll. Tickets cost £12 on the day or £10 if booked in advance (half price for children). For the full list of dates, to book a tour or for more information, visit www.theargyllhenley.co.uk/
midsomer-location-tours