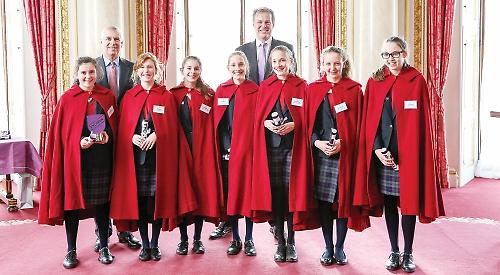 SEVEN pupils from Queen Anne’s School in Caversham collected an award at Buckingham Palace from the Duke of York and Dragons’ Den star Peter Jones.

The year 9 girls were winners in the Key Stage 3 category of the annual Tycoon in Schools competition, which the millionaire businessman set up through his charitable foundation in 2012.

Their product, which was framed, comprised a model tree wound from gold wire with the names of family members hanging from the branches on paper hearts. Once these were all sold, the team had made a profit of £154.86, a margin of 89 per cent.

The girls had to submit a written business plan and were judged on a combination of profitability, teamwork, sustainability and community engagement.

At Tuesday’s ceremony, the girls were presented with certificates and a trophy. Economics and business studies teacher Anne Tynan said: “We’re thrilled to have won the category and so proud of the hard work and commitment the Little Acorn team has demonstrated over the past few months.

“It was an honour to meet the Duke of York and Mr Jones and the competition has been a great learning experience.”

Mr Jones, who has been a panellist on the BBC’s Dragons’ Den since its launch in 2005, said: “Every year we see an incredibly high standard of business ideas come to fruition and this year has been no exception. I have been bowled over by the achievements of all the students and it is always such a great honour to crown the winners. This has certainly been the most successful Tycoon in Schools to date.”

Queen Anne’s School has won awards in the competition for the past four years.

In 2013, a team called Back Into Vintage LTD produced “upcycled” vintage products, such as fruit bowls made from vinyl records, which were named most innovative concept.

In 2014, a team called Retrocycle won their age group with a similar concept and in 2015 RustiQ won with chalkboard notices and friendship bracelets.